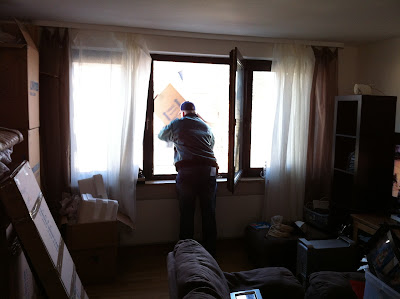 This morning I had to wake up at 0620 so I could check in with our platoon sergeant. My NCOIC gave me the day off so I could take care of all my household goods, which I plan to do…but I'm not going to start at 0630…so I promptly went back to sleep. At around 0830 we got up and started the process of organizing all our stuff. We unpacked the last few boxes and then continued to put stuff away for the rest of the day. The movers came about 1500 and picked up all the boxes and paper from the move. This was nice because there was a lot of them and they were taking up quite a bit of room. Once the boxes were gone I made a quick trip to a motorcycle shop with SPC Whirlwind's wife so I could pick up a cover for my motorcycle. Unfortunately our box with the cover didn't make the move…it is in storage back in Washington. We found out that even though boxes were marked as one thing, sometimes there were completely different things in them.

Once back, I put together all the Ikea stuff my wife bought yesterday and proceeded to get the entertainment system up and running. It's nice to have a TV and stereo now. I watched some college basketball while organizing everything…first game I've been able to watch since last season back in Korea. At least everything is up and running before March Madness!

When I got to hooking up our desktop I found out that our monitor and our 2 Terabyte external backup drive both broke during transport. This really sucks because I was looking forward to actually using the big computer finally instead of my laptop. Now I have to go through the process of putting in a claim. Not sure how that goes, but I'm not looking forward to it.

Email ThisBlogThis!Share to TwitterShare to FacebookShare to Pinterest
Labels: 25B, Army, Germany, motorcycle