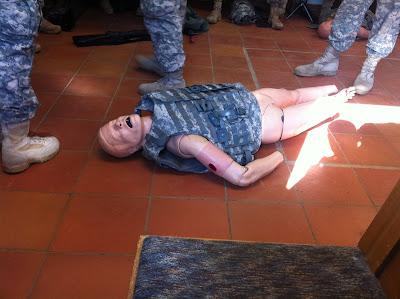 Our practice dummy for the first response aid training.

Wake up was at 0530, but I don't know if I even slept at all. I had the worst night's sleep ever. People were coming and going out the two doors of the barracks all night long and each time they would squeak and slam, there was mass snoring and coughing throughout the night and to top it off I had a headache on the entire right side of my head that was throbbing like a son of a gun.

I got up and made the trek up to the bathroom (we only have porta-potties near the barracks) to shave and brush my teeth. I wasn't going to try and shower in the morning with the mass of people trying to get in and out of there. I then ate breakfast, which was actually pretty good for DFAC food.

We then formed up as a squad and headed to a class. Our first class was "First Response Training". This included the steps to take if someone is injured on the battlefield. How to stop arterial bleeding, then get the person moved out of harms way. After that how to check and perform a more thorough search for other injuries and how to treat them until help arrives. We then broke off into small groups and practiced what we were taught after given various scenarios by an NCO that was watching us. Two of us would be standing there and all of a sudden the NCO would say "bang…your buddy just had his leg blown off". The person would have to fall down and the other would get cover fire, then have to apply a tourniquet and then move him to safety.

We broke for lunch and were told we only had a half hour. Lunches all week were MREs, so I brought a lot of snacks to chow on instead. I quickly ate some snacks and then returned outside the barracks to form up for our next class. For this class we had to be in full battle rattle (helmet, body armor, weapon, and eye protection). We then marched outside of the FOB (forward operating base) to an area with a big field and a fake town. This class was "React to Fire and IED". We were given a safety brief first which would be the format for all the outside safety briefs in the future. SPC JayZ from our office ended up slipping on ice and getting a concussion last week while out in the field. So every instructor would let everyone know of the icy conditions and to be careful when running around.

We all put on our wet weather gear because we found out that we would be "getting dirty" during this training. Basically as a unit someone would call out that we were being fired upon and everyone would get down in the prone position. After that each team would bound forward 5 to 10 meters then get back down on their bellies in the prone position. We would do this until we were told to stop. The field we did it in was wet and muddy, so I'm thankful we all donned our wet weather gear first…although some ended up laying in puddles that were just too big and the wet weather gear didn't help too much.

We then did our IED training, which was basically us marching down a road until we spotted the IED. We then would run away from it and pull 360 degree security while someone pretended to call it in to command. After this we all practiced some urban combat by breaching a glass house and securing the room.

We ended getting back to the barracks at around 1600. I took that opportunity to take a quick nap and rest until 1745 when we headed to the DFAC for dinner. When we were getting served the person in front of me asked the server "what kind of meat is that?". The DFAC worker looked at it for a bit, then answered "I'm not really sure". That is just great…not even the DFAC workers know what they are serving us.

After dinner I headed up and took a much needed shower. Even at night there are still a number of people in there, so I make it a quick one. No need to spend any extra time in a close area with a bunch of naked men around me. I spent the rest of the night hanging out with SPC Mac and McLovin, then reading for a bit before lights out at 2200. Tonight I placed my PT cap over my eyes and I also put in my earplugs…hoping for a better night's sleep this time around. 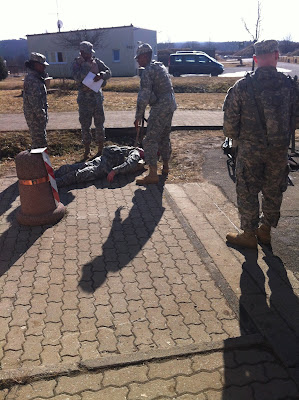 I took a quick snap shot of two other people showing their first response aid while the two NCOs tell him what is going...i.e. his leg just got blown off!