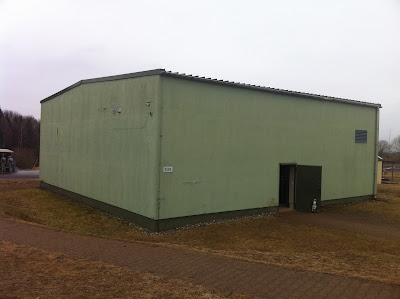 A photo of our barracks that we stayed in during the FTX.
One big square building full of bunk beds

Wake up call was at 0530 as usual. I shaved and brushed my teeth...my morning routine. We had to be ready for the "Legal Stand Down" as they called it.

0730: We had our ASAP (Alcohol Substance Abuse Program) class. I guess the brigade has seen a spike in the amount of drug and alcohol incidents lately and thought that giving everyone another required class would help the problem. Since we've had one it seems every month, I don't think a mandated class is the answer to the problem. It was interesting to hear every single person around me state that they plan on smoking a lot of weed as soon as they are out of the military though...LOL

0830: JAG class. This class told us all about the repercussions of doing bad things in the military. There have also been a lot of sexual assaults lately in our brigade and they thought this class would help with that problem. Oh please someone help me…I hate all these mandated classes. Between these and all the commercials we see on AFN I'm going to go nuts!

0930: Free time. We were released back to our barracks to do anything we wanted, which for me meant laying on my bed listening to music and playing games on my iPhone. Occasionally walking around and socializing a bit. Turned out to be a pretty boring day…really an unneeded day for this exercise. Unfortunately there is no WiFi in the barracks…or anywhere in the training area. Lots of people passed the time sleeping, playing spades, smoking, reading or playing solitaire. Right now I'm thinking this whole exercise has pretty much sucked. The weather, while not actually raining on us, has been cold and miserable. My body has been out of it's routine and I've had bad headaches almost daily. I've been taking an unhealthy dose of Excedrin multiple times a day to combat the headaches. It has also reinforced how stupid the army can be at times. It seems like the exercise wasn't planned well and we just sat around most of the time doing nothing. Why not start it later and end it earlier instead of having us lay in our beds for hours at a time?

1600: We were all told to get outside for an awards ceremony. Once outside and formed up anyone with a vortex (heavy rain coat) or fleece on is told to take it off "If you are warm, then you are wrong" I get them wanting everyone to be uniform during the awards ceremony, but tell us ahead of time before we get out there. Now we stand a half hour in formation waiting for it to start.

The whole thing was a bit of a joke…speeches about all the great training and a lot of patting themselves on the back. They gave all the instructors either coins or awards (army achievement medals). They also gave some to the soldiers participating, but somehow there were none for our squad or even for anyone in our company. They also took this opportunity to pin on a couple of promotions, one to sergeant and one to warrant officer 3. Once that was done we were released back to the barracks.

I really hate the negative attitude I've developed lately. It just seems to keep getting worse and worse. I feel like all I write about and feel is negative. I feel it and I'm aware it's there, but I just can't seem to get out of this funk.

1700: Eat dinner at the DFAC, steak and shrimp…not that bad. It's then back to the barracks to try to find some way to pass the time until lights out at 2200. Biggie vs Tupac is the conversation all around me. Which one is the greatest rapper of all time? The argument is getting louder and louder and everyone has their two cents to throw in. I have to ask…what about Vanilla Ice? I didn't do much of anything today, so I decide not to shower.