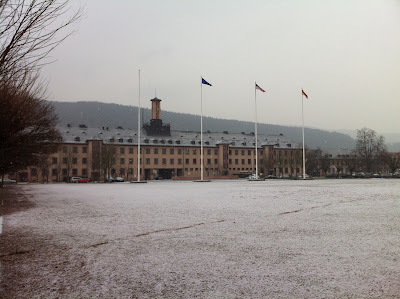 A photo I snapped on the way back to our office from the armory.
This is a picture looking at the front of the post and is also the field
where we form up for PT each morning.

This morning I had to be ready by 0645 to be picked up by our platoon sergeant. Our battalion had the range today with me, our platoon sergeant, and a co-worker I'm going to call SPC JayZ from our office heading out. We went to SPC JayZ's barracks and picked up our weapons from the armory. We joined up with some others from our battalion and hopped in the TMP Van to head out to the range. The drive was about a half hour or so.

I tried to prepare myself for the worst because I knew it was going to be extremely cold. We were required to wear our body armor and our helmet as well as a water source. Additionally I wore my poly pro (army long johns), my normal uniform, my polar fleece, and my cold weather jacket. I also wore my gator neck and my PT cap under my helmet along with my normal gloves. My core did OK throughout the day, but it was my toes and my fingers that went numb from being so cold. I probably could have worn two pairs of socks and even two pairs of gloves to help with this…I'll keep that in mind next time.

My experience at the range is a long boring day with very little of me actually doing any shooting. There is usually a ton of people trying to qualify and only a limited number of lanes available. When we arrived to this range I noticed that the place was quite a bit smaller than all my previous ranges. I also noticed that we will be using paper targets instead of the pop-up targets I've used every other time. With a paper target there are bigger and smaller images representing the targets at closer and further distances. They are all one one sheet of paper and you can only hit each one of them a certain number of times. For example the biggest target you can only use 5 of your 40 shots on.

There were only 8 lanes available, but we had far less total people than I've previously been with at ranges. I would say there was about 40 people all together. The process went pretty smooth, with the first step of zeroing our rifles. Since I hadn't used this rifle before it took me 4 tries before I made all the adjustments and had it zeroed. Each round consists of firing 3 shots to your practice target and then going up and seeing where you hit when aiming at the dead center. You then make adjustments to your sites left, right, up or down depending on those shots. You then start the process over until you finally hit a group of shots in the center area.

I headed to go pee…this is one of the few times in my life I really wanted to stay longer in the bathroom. These were heated bathrooms and after being outside in the freezing weather, the bathroom was a welcome paradise of warmth.

I then waited in line to do the actual qualifying. We shoot 20 rounds in the supported prone position. This is the best position for firing, as you lay down you can support the rifle on the sandbags and get a very steady shot. I used this position to shoot into the smallest targets on the paper and then moved to the slightly larger targets as well. Each of the 4 small targets could take 3 shots and then the 2 slightly larger ones could take 4 each. I could have easily hit all the medium to large targets in this position, but since this is the best position I decided to go for the hardest targets.

We then shot 10 rounds in the unsupported prone position. This position is still laying down, but there is no use of sandbags. You have to use your elbows to support yourself. This position is not as stable, so I chose to shoot 5 shots into each of the medium size targets. The last position is the kneeling unsupported position. This position has one knee down and the other is used to rest your elbow on to support your rifle. This is the toughest position because it's the hardest to keep everything still. I used this position to shoot 5 shots into the last medium and then the large target. We then walked up and grabbed our targets. We had to write our rank, name and unit on them, and then turn them in. I ended up shooting a 33 out of 40. One less than I previously qualified with, but considering how miserable and cold I was I'll take it.

Once everyone was finished we loaded up the TMP van and headed back to the office. We were about half way there when our NCO driver got a call from the first sergeant. He found out the SPC JayZ shot a 24. 23 is the minimum qualifying standard, but the first sergeant wanted everyone to shoot a 30 or above (sharpshooter). We had to turn around and head back to the range. Nobody was very happy…especially SPC JayZ. He was upset that even though he met the army standards, he still had to go back out in the cold and shoot again. After all was said and done he went out and shot twice scoring a 25 each time. We ended up leaving and he was told he'll have to come back tomorrow and try some more. He was not a happy camper.

When we arrived back I spent a couple hours cleaning my rifle before turning it back into the armory. I don't think the NCO there ever takes a rifle the first time someone brings it back to him. It reminded me a little of basic training when we would sit for hours at a time cleaning our rifles. I was able to make it back to the office at about 1600. My NCOIC asked how the unpacking was going and I told her we're doing our best to try and get settled in. She told me to take the day off tomorrow and work on our house. That is pretty awesome!

We then were briefed from our retention NCO about changes in reenlistment. Now the local commanders will have final say in a soldier's reenlistment. They are making it a little harder to reenlist with a number of rules that will flat out bar you from being able to reenlist. The thing that bothered me a little was the fact that now the local commanders can flat out deny a soldier from reenlisting if they want. This means that if for some reason a soldier and a commander didn't get along or if there were bad rumors going around about a certain person, the commander can deny a person the ability to reenlist. It just seems to me that it gives the local commander a little too much power of the entire future of a person's life. Just some more interesting changes that are coming out because of the reduction in force and the reduction in budgets. I'm sure there will be more to come.

I headed home unloaded a van full of furniture that my wife bought from Ikea. She rented a van with SPC Whirlwind's wife and was able to get some needed furniture for our place. I'm going to be a busy guy tomorrow!