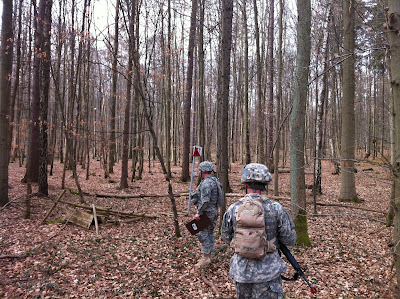 A photo I snapped during the LandNav course...if you navigate correctly you will run into a sign like the one we found here. Write down the number, then plot your course to the next point.

Wake up call was at 0530 as usual. I had another night of good sleep thanks to the ear plugs and the PT Cap over my eyes. I did have a headache though. Luckily I packed Excedrin which seems to be one of the few over the counter medications that will get rid of my headaches. I know I haven't been drinking enough water out here. It's kind of hard to hydrate properly because when I'm out in the field training, I don't want to be stopping everyone to take a piss all the time. I'm also out of my normal routine where I have water with me at my desk and I try to make sure to finish it each day.

I headed to the DFAC for breakfast and they had coffee this morning…Good News! The DFAC has the hot meals served outside as I mentioned in the mobile cooking area, but inside they have a number of drinks as well as individual cereal containers and other small things like pastries and doughnuts.

After breakfast we formed up outside the barracks and headed to a classroom for LandNav. This class consisted of how to read maps, a compass, and how to use a protractor. We were assigned to 3 man teams and each given 3 different coordinates to find on a map. Once this done we also had to figure out the exact direction and distance to these points. These would be the points that we had to find during the next half of the day. We then headed outside to measure our steps so we can count off 100 meters. For example my count is 72, every time my left foot hits the ground counts as a step. When I hit 72 steps we've gone roughly 100 meters. This varies of course with the terrain and such, but it does give you a rough estimate.

We broke for lunch and then formed up in full battle rattle once again. We marched about 25-30 minutes to the LandNav (Land Navigation) course. We broke up into our 3 man teams and each headed to our starting points from the "Known Point" which is the end location. We started at point A which was about 300 meters from the Known Point. Once we arrived we used our compass to figure out the direction to travel. We decided to have one person use the compass, one person measure the distance (me) and the last person to be the scribe and also help keep a look out for the locations.

The goal is to find a sign at your location. If you've gone in the correct direction and the correct distance, there should be a sign in the near vicinity with a number on it. You make note of the number at each location and when you report back to the known point, you are told if you did it correctly. We found ours right away, but also looked around to make sure there weren't any other signs nearby that we might want to take note of. There weren't and we were able to find both points easily. We then headed back and ended up being the 3rd ones back. I'm sure we could have contended for 1st place if we tried running, but we wanted to take it slow and smooth to make sure we didn't have to go back.

We then waited…and waited…and waited. There were a number of groups that took an hour longer than us. The last group took so long they sent out the Humvee looking for them. The Humvee would drive up and down the dirt roads honking it's horn. It was pretty funny. Finally they returned and we started the long trek back. Getting to this point was mostly a downhill affair, so going back was an uphill battle all the way. In full battle rattle it kind of sucked.

When we finally got back and turned everything in, we found out that one team lost their compass. These are $50 a piece so it turned out to be a big deal. Nobody could leave and everyone had to double check themselves. Finally the team that lost it ended up having to go back out to the course and try to find it. Sucks to be them!

We headed back to the barracks and were hanging out when all of a sudden the 1st SGT and the commander come in and start telling everyone to get out and get to the DFAC. This was pretty freakin' stupid! Everyone had a routine up until this point, we all knew the DFAC is open from 1700 until about 1830 or so and people would randomly head up there when they felt like it. This worked out perfect, but when you get the entire barracks heading up at once along with folks from other barracks trying to access this small DFAC it turns into long lines and nowhere to sit.

We then weren't allowed to shower or change afterward until we finished with a required meeting at 2000. The meeting was the "OpOrd" (Operations Order) which our platoon leader gave. We were told that we were going to do "Operation Eagle Eye" tomorrow. We would be patrolling the roads and a village looking for IEDs and watching out for enemy combatants. I found out I would be part of the aid and litter team (a litter is another word for stretcher). This meant I would be in the back, but would have to run up and take care of any injured soldiers.

Once the meeting was over I headed to take a shower and then relaxed as usual on my bed. I finished my book and started reading another book by Tucker Max called "Sloppy Seconds". This ebook is actually free and contains 2 parts. The first part is 3 of the stories selected from each of his first 3 books. The last is all material that wasn't enough to make an entire book from, but is still pretty funny. I would really suggest checking it out..especially if your a guy and you like a good laugh. The first story in it is what made me buy the first book and start reading all his stuff in the first place.

We found out that even though we're doing the actual mission tomorrow (Tuesday), that the "Good Idea Fairy" came and decided we would be having some extra classes on Wednesday and would not be leaving until Thursday. There had been rumors all week that we would be leaving on Wednesday, so this was kind of a bummer.