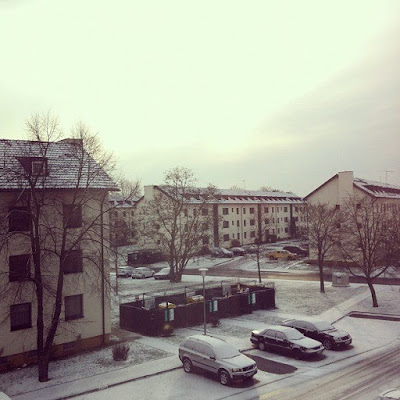 The light dusting of snow we received this morning

This morning I got ready for PT and when I looked out the window I was surprised to see a dusting of snow everywhere. This didn't stop our PT formation, but we did have PT inside (in the racquet ball court) and they also cancelled the scheduled PT test that some in our company were scheduled to take. Our PT this morning was PRT (Physical Readiness Training) which is the newer method of conducting PT and the same method I did in basic and AIT. A lot of units are still working it into their PT schedule and there is a lot of resistance because a lot of soldiers do not think it does much for them, and a lot of others just think it's pretty gay. I was just glad we were inside because it was freakin' cold outside.

Once finished with PT, I was dropped off at my place and had to make a somewhat quick turn-around to get ready and leave. We had to be at the office before 0900 and then head to some training session in our battalion conference room. We arrived in plenty of time and then made our way to the conference room only to see it filled with another meeting. After waiting a bit we were told to come back at 0930, so we all head back to the office and hang out for a bit before heading back. We wait…and wait…and wait, then at almost 1000 we're told that it has been cancelled and to go back to the office. A great waste of time.

In the office we have three machines that are inoperable because they are being migrated to Windows 7. One is a sergeant's machine who is on leave and two others are in our main office, which leaves only one computer for 6 or 7 people. It's great that the army is finally rolling out Windows 7, but however the way they are going about it is pretty bad because the computers were down all last night and all day today.

My big job today was to find a big unused binder and take a huge stack of papers (the entire manual for PRT), then use the 3-hole punch on them before placing them all in the binder. The entire time I was doing this I kept thinking to myself what the heck am I doing? Here I am taking a few sheets of paper at a time, punching holes in them, then placing them in a binder. This has become the extent of my job. I'm a highly qualified I.T. technician with management experience who wanted to serve his country thinking my talents could be put to good use…hold on for a second I have to punch some more holes…I have a number of technical certifications, I have years of experience working with computers…hold on I have some more holes to punch…OK you see where I'm going. I can't believe I'm doing this job, this is such a joke and waste of my time…definitely not anything I had envisioned when I joined the army. In fact I think my previous job in Korea was better. Yes most of it was setting up meetings and serving coffee and water, but at least I was the IMO and I fixed a computer problem here and there. I had the "demigod" card with all the admin rights to all of our computers. People came to me with computer questions all the time. Here…I punch holes in paper and stick them in a binder. Oh yes I also have a lot of paperwork to look forward to doing once I learn the "real" job here…that is all it is…paperwork. I really can't believe I'm in this situation right now. I have no motivation or desire to stay in the army past my contract date, I have no desire to move up past the rank of Specialist. I don't want more crap duties and responsibilities placed on me while still not doing the job I signed up for…..Wow, enough of that…enough complaining…I just had to get that out.

Lunch today was a quick one at the food court and then I joined the guys in a room adjacent to our office that houses a ping pong table. The guys here play a lot of ping pong during their lunch break. I joined in and quickly realized that I was outgunned. Mind you before this moment I thought I was a decent player. I had just come from Korea and I beat two Asians while I was there! In my mind I was even more than decent…I was the great white hope! I stepped up to the table and across from me was a ginger from next door (43rd Signal HHD). We started playing and as I was running all over the place hitting balls everywhere, the ginger calmly stood in the middle of the table returning everything I sent at him. The guy was like Forest Gump! He used all kinds of spin and speed and at the end of the game I counted myself lucky to have even scored 2 points!

The afternoon went by pretty quick, I watched SPC Whirlwind give another security brief to some customers. I will be doing this soon. The first sergeant came in and went over some counseling statements that the NCOs where giving. I am supposed to have an initial counseling soon, but I think my boss has just been too busy. AT 1600 we all started getting into our dress uniforms. We are a mixture of the Class A's (the old green uniform) and the ASU (Army Service Uniform - the newer dress blues). For some reason mine felt a little tight…I'm not sure why :) I still had to finish getting mine ready, then when it was time for me I was docked on my shoes being a little dirty and finger prints on some of the buttons I had just put on. It feels nice to have a couple more ribbons on it though. Last time I wore it I only had the three given to everyone in AIT (Army Service Ribbon, Global War on Terrorism, & National Defense Service Medal). I added the Korea Defense Service Medal and the Overseas Service Ribbon. Not much, but it looks a little better.