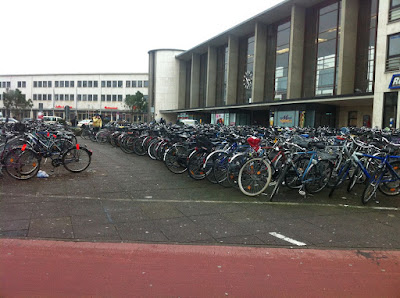 A photo I snapped as we drove by the Heidelberg train station...a bicycle parking lot!
There were a lot more I couldn't even fit in the picture!

This morning we did not have any PT. Today was "Days of Excellence", I wasn't sure exactly what to expect since this is my first one. It includes our company and part of 43 Signal as well, we have to be in our dress uniforms and there are some awards given out…this is all I was told. My boss picked me up and we headed off to Mannheim which is where the event was taking place. The weather was so cold just getting to the car I was actually shaking, and it was taking a while for my boss's car to get warm…at least he has heated seats and they were working.

We arrived at Mannheim at about 0800 and it was 5 degrees out! Let me tell you that the Class A uniform does not do much to keep you warm in 5 degree weather. We had to walk about a block before going into what was pretty much a warehouse, where the Days of Excellence is taking place. Unfortunately the warehouse was only a degree or two warmer than outside. The entire time we were there I could not get warm. We ended up getting in formation preparing for the uniform inspection to come from the 1st Sergeant/Command Sergeant Major (the same person is performing both roles as for now). We practiced staying in formation, performing open ranks and close ranks, and stood in formation for quite a while. Then all of a sudden we were all told to grab a seat, it was already 0915 which was 15 minutes behind schedule…I guess they decided not to do a uniform inspection after all. We pretty much just stood in formation wasting time.

After everyone was seated we had some briefs on sexual assault and safety on the road. After a quick break we moved on to the award ceremony were the email migration team received some army commendation awards. There were a few other "atta boys" and then the battalion commander started talking about a survey that was conducted right before I came. There were a number of issues that he went over…people's complaints and such, but because the complaints didn't have specific names he said there is not much he can do. It was an anonymous survey, but folks still didn't name names of who they were complaining about because there was fear of reprisal. If there is an NCO that has some bad things said about him or her, it may be pretty easy to figure out who said them depending on the size of the squad or platoon.

After the commander was finished, S2 came up and talked about piracy and how the German government is now cracking down on illegal downloads. There have been people in the 43rd that have been caught and are now paying fines. Shortly after I got here I found out it wasn't like Korea where piracy is rampant. I use a program called "Hide My Ass" which makes a VPN connection to various servers around the world. I can also choose an American server if I want to be able to stream from websites such as Netflix or Hulu which only allow users in America to use them. It's a nice service and I don't have to worry about any hassle because when it is on, everything is encrypted.

We finally left at around 1230 and were told that we had to be back at the office at 1300 to work. What sucks is that everyone else had the rest of the day off, but our office has to work. It had everyone a little upset. Right when we got back I headed over to Subway and brought back a sandwich. I then changed out of my Class A's to my ACUs, but found out I forgot to bring different socks and a different undershirt. The socks were no problem because they are hidden by the boots, but the shirt is a different story. I wore my polar fleece over my top and zipped it all the way up so there was no chance of seeing anything below my chin…it just looked like I was pretty cold. That was not far from the truth as I spent the rest of the day next to a co-worker and his little space heater trying to stay warm.

I left shortly before 1700 and my boss gave me a ride home. I spent the night hanging out with my wife. We watched a Netflix disk of "24" season 6…love that show. It's always nice to hang out with my wife and stay up late without worrying about getting up early in the morning.