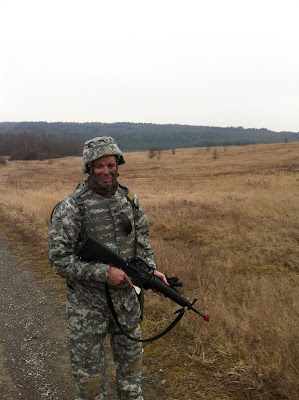 Wake up was at 0530 as usual. I headed up to the wash room, brushed my teeth and then ate breakfast at the DFAC. We had to form up at 0700 for a police call around the FOB. For those who don't know a "police call" is another way to say we walked around and picked up trash.

0800: Team meeting. Our squad went over our mission and how we would accomplish it. Not really too involved other than we would be pulling rear security until something happened and then we would be called up to help with first aid.

0900: Squad practice. We formed up outside and walked through how our formation would look and what we would do in case of each event (i.e. IED, direct fire, etc).

1000: Rest…we hung out in the barracks and ate snacks

1100: We formed up outside the barracks in full battle rattle with gas masks and wet weather gear. It was cold so I also had on my thick poly pro on underneath to try and keep me warm. We marched about half way to the town and then did a walk through once again. We had two officers with us, who were the evaluators and also the ones who would tell us who is injured, dead, or if there is an IED...etc.

The walk throughs were a bit of mad chaos. The first two people who were told that they were dead was a 6'8" big black dude as well as McLovin, who is one of the thickest guys in our squad. We couldn't actually move either of them, so we had to "simulate" carrying them back. We didn't have an actual litter to put them on and we couldn't carry them, so they just stood up and walked back. During the walk throughs we simulated IEDs, Gas, and indirect fire. Everyone was running everywhere, I couldn't hear crap because I had my earplugs in and I was also running all over trying to help injured people because I was part of the aid and litter team. For being a "walk through" it kind of sucked. We had a quick review over everything and the officers told us what we needed to work on before the real operation started.

1300: The mission starts and we all have to do a test fire of our weapons. The officers don't want anyone not firing their blanks because they don't want to clean their weapon later on…it's like they read my mind. We start marching and do a lot of stopping and making a 360 degree perimeter while suspected IEDs are checked out. We finally make it to the fake town and there are a number of people dressed up as Arabs walking around. One of the people in front spot an IED and we break off into two groups and end up assaulting the town. There was a lot of confusion and a lot of people either dead or injured. They did actually have real litters to use there, so I ended up having to carry a number of people to the medivac landing area on the other side of town. This turned out to be a good workout! I then pulled security around the medivac zone while the rest of the people started getting out of the town.

We ended up getting blasted by the officers afterward because we assaulted a "friendly" town. We knew we were going to be attacked and even though we saw the IED, the officers were having non of it. So we all got yelled at a bit before we could continue on.

Next up we keep marching down the road with more possible IEDs and 360 degree security. We spot all the IEDs before getting to them, so the officers have to just call out IED and take out some pyrotechnics and have blasts in the middle of the road. We then have to get the injured again and move them like before. This happens a few times until they pop a smoke grenade and tell us it's gas. Everyone has to put on their gas mask quickly and then get out of the contaminated area. It sucks to run with a gas mask on because your lungs can't quite get the deep breaths they need fast enough. So you get the feeling of slight suffocation. To make matters worse a number of people "died" because they did not get their masks on in time, so we had to physically carry them out. One of the people was the radio guy who was carrying the radio on his back. Somehow I got stuck with lugging that heavy ass thing around on my back and helping carry people out of the contaminated area.

I thought I was about to die at some points. I had to literally take of my mask so I could take in some deep breaths or else I may have passed out. Once done we had to decontaminate ourselves. This involves taking a charcoal pad out of some packaging and wiping down our hands and then our face. In order to do our face we had to take a deep breath and only open our mask enough to reach a hand in and start wiping. We had to keep doing this until we were able to wipe our entire face.

Once finished we were then told there was an IED behind us and had to run up an incline 300 meters. That did it for me! I made it most of the way, but with that heavy ass radio on my back I couldn't make it the entire way. Once everyone was at the top we had once guy who sprained his ankle or something and they had to call in and have a van come and get him.

We then marched back to the FOB and turned in any blank rounds we had left along with the radios. I then got voluntold to help with 9 others for a police call around the areas we just went on patrol. So in full battle rattle we all had to walk around looking for trash around the entire course. It sucked and nobody was happy about that one.

Once back in the barracks I don't ask, I just leave and shower. I was soaked with sweat through my shirt, my poly pros, my uniform and all over the inside of my wet weather gear. It was pretty gross. I then decided to hit up the "gut truck" and purchased two brats with 1.5 liters of water. The gut truck is there everyday, but I didn't want to spend money when there is free decent food available. Today was an exception though…we finished the operation and it was time to celebrate. I was very dehydrated and ended up drinking the entire 1.5 liters of water rather quickly.

While we were doing the police call, everyone else was doing the AAR (After Action Review) of the operation. I heard it went pretty bad and no matter what any of the soldiers said, the officers had an explanation and were not even listening.

I hung out on my bed…finished my second book and then just played games on my iPhone (Monopoly, Plants Vs. Zombies, & Solitaire)…just things to pass the time. When I got up to charge my phone I could feel my entire body ache. I think I'm getting too old for this crap. Speaking of charging my iPhone, I brought a charger, but they do not have the standard American plug in these barracks…only the German plug-ins. Luckily a guy a few bunks down let me borrow his for an hour or so each night so I could keep my iPhone charged.

I brushed my teeth and then hung out with McLovin and SPC Mac for a while. I can feel my body is sore everywhere. I should sleep well tonight!