Prepping for the Field - (Germany) Day 59 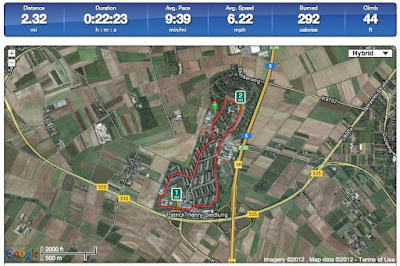 This morning's PT was on PHV (the post I live on), so it was easy to get to and really fast too. We were told we could wear civilian clothes, so I brought my iPhone along with me and used RunKeeper to track our run. We ended up having a release run, which is basically everyone running at their own pace. We ran around PHV which is also the same route we take for our ruck marches. I had to struggle through the run, I just wasn't feeling it and never got my second wind.

We had to bring in all our equipment for the field to get inspected first thing in the office. We then had our sergeant's time training. The training consisted of watching a video showing all the various PT exercises in PRT. Since PRT is relatively new, the people that have been in the army for a while are still trying to get a handle on the various exercises.

I then was chosen to go on a detail. I headed over to the gym to help clean up something, but when I arrived they said it had been moved to tomorrow. So I headed back and then had my lunch in my car listening to the radio. Once finished I headed to the medical clinic for an appointment. I still have the rash on my chest and it hasn't improved since my last visit. The doctor this time looked me over and decided it was something else. She prescribed me various cream medications to apply, but these are only to relieve the symptoms. One is actually a steroid which the previous doctor was thinking about prescribing. I have to make a follow up appointment with a dermatologist to see what they can do. She said I may get prescribed tanning sessions…LOL. The ultraviolet light is said to help with this particular rash. That would be pretty funny if I had to leave the office for a tanning appointment!

One nice thing about the military health care...I was able to make my appointment, go to the appointment, and then get my prescriptions all in one day...and didn't have to pay a dime. Gotta appreciate that.

When I got back to the office, I had a couple of hours checking my email, surfing the web, and chatting with co-workers before we were told we could leave at 1600. We were able to leave early because we have to be in so early tomorrow for the field exercise. I headed over and picked up my wife, then we headed home. I had to unpack all my crap so I could re-pack it all better. I also added some various cold weather items and all the snacks I bought for this exercise. After a couple shows we then called it a night and turned in.

This will be my last blog for a week or so. I'll be keeping a journal of the field exercise on paper, then upload it once I get back. This process may take a day or two…or three. So no entries for a week and a half or so.