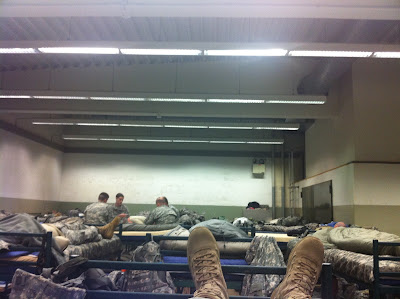 My view of the barracks while laying in my bunk bed...pretty tight quarters

I woke up at 0250 after a crappy nap. I can't even say a crappy night's sleep because I had to get up so early. I got ready and left the house at 0325. My wife had to drive and drop me off, so she could have the car for the week I'll be gone. I headed to the armory and picked up my weapon and then had to wait at our office until 0515 when the bus finally arrived. I have a ruck sack full of stuff, as well as my duffel bag and my body armor that I have to carry out and load onto the bus. The bus just came from Landstuhl and Mannheim, so the storage underneath is already completely full. It is hauling a trailer though that we can throw all our stuff in.

The bus leaves at 0600 and somehow I end up with a seat to myself. I'm very grateful because these seats are pretty small and I'm not a small dude, so I'm able to stretch out a little using both seats during the 3 hour or so ride to the Schweinfurt training area.

Once we arrive around 0900, everything is unloaded and I find my bags and body armor, then head to our barracks room. The room is just one big square building with as many bunk beds as they could possibly fit in there. There were a number of people that took off with just one bag or something so they could claim their bed. The bottom bunk was a coveted item and they went fast. By the time I made it down to the building there were only top bunks left, I picked one by placing my duffel bag on top and hanging my body armor from the side.

At 1015 we all have to head to the DFAC which is an amazingly small place. The commander has his opening speech and then the chaplain does a suicide prevention training. Dear god, didn't I just finish one of these? I'm thinking to myself that forcing everyone to go through these mandatory trainings may actually cause someone to commit suicide! We are then broken up into squads, and my squad consists of my platoon leader from our office, a specialist from the maintenance side of our office (I'll call him SPC Mac), and McLovin. These are the only ones I actually know, but there are about 16 or so folks from various offices from around the brigade in our squad. We are then told to head back to the barracks until further notice.

Once back on my bed I start to read my new book "Hilarity Ensues" by Tucker Max. It's his 3rd book and it's funny as hell. Surprisingly we do nothing for the entire day. When I say nothing, I mean we did absolutely nothing. I sat in my bed and read, played games on my iPhone and chatted with others…oh and took a nap because I was so tired from getting up so early. Others did pretty much the same with the exception of a couple card games going on here and there. Why we had to get up so early in order to hang out in the barracks is unknown…and actually pissed me off a little.

At 1730 we had dinner at the DFAC. They cook the meals in a mobile field trailer and then we take it into the DFAC to eat. The food was actually not that bad. We were told by the previous week's attendees that it was horrible and they always ran out. It wasn't great, it was typical DFAC food.

After dinner we hung out some more in the barracks and did the same ol' thing until about 2030. We had a meeting where they announced some minor squad changes and told us the schedule for tomorrow. We then continued hanging out until lights out at 2200. I can't believe what a stupid day this was…we had to get up way to freakin' early and did absolutely nothing the entire day…except some suicide prevention training. What a joke! 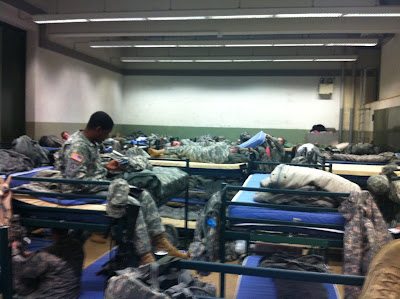 A general view of the barracks during our FTX