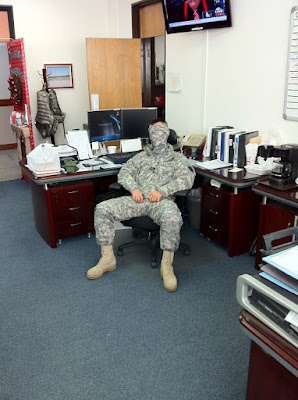 A photo I took earlier this year of Special K asleep in the office...lol

Work call was 0830 this morning. I arrived as usual a little early at about 0815 and was immediately sent up to our conference room to get everything started up and ready for a meeting. I went up and got everything started up including the TV so I could watch a little NCAA basketball, you know it's March Madness time. I sat for about 20 minutes watching the game before a ROK soldier came with a couple of laptops to hook up. I helped him get those up and projected on the screens, then I sat back and watched some more basketball. During any ROK meetings we have to have a person stay in the control room to make sure nothing goes wrong and also to make sure they don't mess with any of the settings. I guess they are notorious for messing up our equipment in there. So it didn't bother me any, I just sat back and watched basketball the entire time. At about 1115 SPC Roy came up with my bag so we could change into basketball clothes for our lunch PT. We changed and waited for the meeting to end which was about 1145. We quickly cleaned up that meeting and then setup for the next one that was going on at 1230, then took off to the gym.

We played basketball again, but this time it was a bit shorter than usual. After a few games SPC Roy accidentally stepped on a sergeant from the command group. It twisted the sergeant's ankle pretty bad and he couldn't play anymore. So I got a good sweat, but didn't die like I thought may happen. I need to play everyday to get back into basketball shape, but it's going to kill me for a while.

SPC Roy and I went back to my room and took showers, then went to Taco Bell for lunch. For some strange reason they don't sell my favorite item here any more…volcano tacos. The do however sell volcano nachos which I decided on. We then ran to the KATUSA snack bar to pick up a to go lunch for our sergeant.

When we got back I headed back up to the conference room and watched more basketball. I had to sit back there again and make sure everything went OK for a KUB (Korean Update Brief) meeting for a bunch of French folks that were visiting. Well actually I believe they were called The French Institute for Defense or something like that. They came in and had on their funny hats. SPC Roy was at the door and said as they walked by he almost threw up because they all really stunk. These KUBs are given to various VIPs and government officials to basically give them the lowdown of North and South Korea. Since we are actually the United Nations Command here we do get people from various governments around the world, but from what I’ve seen it’s usually folks from the American government. The meeting lasted until a little after 1700, then we finally cleaned up and headed down to our office.

We turned in our 3 SkillPorts each to our sergeant, only Special K turned in 5! Our sergeant said that is now the new standard, we all have to turn in 5 from now on. That's fine if we're not busy, but when we are busy and I have school work at night it's going to be tough. It also means that instead of doing longer harder ones, we'll be doing the shorter easy ones just to get a certain number of completions.

When we were about to leave we were stopped at the front door by security. I guess there were some suspicious bags left in the parking lot and the MPs were called to check it out. It was probably some of the French folks. I was able to leave because I could walk the other way, but Special K and SPC Roy had to sit and wait because their cars were parked out there…..bummer.

When I got back to my room I took a nap, I wanted to be able to do some schoolwork but just couldn't keep my eyes open. After a quick nap I was revived and worked on our final group paper that is due on Monday. I then watched Mad Max (3) Beyond Thunderdome in order to finish the trilogy. I hadn't watched it in so long that I totally forgot about the midget and some of the other stuff that was in it. It has Tina Turner in it as well as Mel Gibson once again. There isn't too much driving in this one and it has a little more humor. Set in the future after nuclear war, Max ends up helping a group of kids who are survivors of a plane crash. Out of the three movies in the trilogy, I would have to say that number two "The Road Warrior" is the best.

I ended up staying up late enough to video chat with my wife before going to bed…that's always a nice way to end the day :)