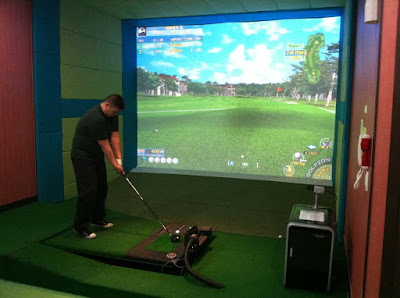 Saturday: Woohoo we have a three day weekend! We get Monday off for a training holiday I guess because we just finished the exercise. I'm so looking forward to it. My first morning didn't start off as planned. At around 0630 I hear a banging on my door, so I get up to see who's there. Some guy asks if Jane (I think) is here. I look at him and say "mum….no". Since he was in civilian clothes I didn't know if he was an NCO or if was was just a private or else I may have told him to get the heck out of here and come back at a decent hour. Turns out he found the girl he was looking for which happened to be next door. I hear them yelling back and forth. Oh great…I guess I will not be sleeping in today. The guy left and came back a few times, finally I told the person on CQ to call the MPs if he comes back.

Since I was up I did some schoolwork and then video chatted with my wife. A little after noon SPC Roy came and picked me up. He was free for the night and wanted to go have some fun. We were going to go golfing, then changed it to the driving range, and finally decided on screen golf which is basically like a big interactive video game. I had never done anything like that before, it was actually pretty fun. They set you up in a room with a couch and table and the big screen in front. You use a real club and ball, but when you hit it into the screen it shows a virtual ball travel along the golf course. It was a lot of fun. We ordered some Chinese food and played 18 holes at Pebble Beach. We both are not very good…I was 40+ over par and SPC Roy was 50+ over par for the course.

We then drove around Seoul just checking everything out. SPC Roy had rented an SUV so he could drive his family and wife's friend around earlier, now he just wanted to chill away from the office. We must have listened to the Far East Movement's "Like A G6" a hundred times! For those of you who don't know the Far East Movement, they are a bunch of Asians that have had a couple of hits on the radio. I think SPC Roy is totally addicted to them. SPC Roy wanted to hit up a bar, so we went to The Rock n Roll bar in Iteawon (my favorite bar) and heard some good rock and roll to even out the night. We played some pool, some darts and had a few beers. We then headed off to SPC Roy's apartment where we watched "The Expendables" and ordered some chicken delivery. I ended up staying there on his couch for the night.

Sunday: I woke up with a bit of a headache. I'm not sure if it was the love seat I was sleeping on, or the lack of water from yesterday. We headed downstairs to the 7-11 where SPC Roy bought me some drink that was supposed to "help my liver". We drank one before the bar last night and he said it's good to drink the next day too. I'm not sure what it was, but it didn't taste bad. Unfortunately you can't purchase aspirin or any other drugs in Korea except at a pharmacy. That sucks! Guess I'll wait 'til I get back to my room before getting some aspirin. On our way out of 7-11 we heard a big BOOM!!! I looked up and saw a guy on a scooter had just ran smack into the side of a car. The wheel of the scooter flew off and was rolling down the road, the scooter driver himself did a few rolls as well. Holy Crap!!! I can't believe that just happened!! The scooter guy laid there for a bit, then kind of sat up and started rubbing his butt. The car driver got out and checked on him. SPC Roy and I ran out to the middle of the road and started directing traffic around the accident. The scooter driver stood up for a bit, but when he heard the ambulance coming, he promptly laid back down and stopped moving around. SPC Roy said Korean's are notorious for milking the system. They will stay in the hospital as long as possible for any reason. Once the cops arrived we took off and headed back up to his apartment.

SPC Roy gave me a ride back to my room and I was able to video chat with my wife and kids for a while which was nice. I later had to turn down the young hawaiian when he called and wanted to go out. I had to work on a paper for school. I got about half of it done before I heard a knock on my door. To my surprise it was SPC Roy again. He asked if I wanted to go anywhere…do I need a driver…anywhere you want. I laughed and told him my only plans were to go to the theatre and watch a movie later. He said he was down with that and we took off, he had to go to a Korean grocery store called Lotte Mart. The place was crazy, I would have taken some pictures…but I forgot my iPhone in my room. It was like black Friday but in the grocery store. I had people hitting me with their carts, their baskets, themselves…they navigated the store like they drive here in Korea…with seemingly no rules. There were workers giving out not only samples of food, but wine and beer as well. The place was a madhouse, and SPC Roy said it's like that every weekend! That was quite an experience.

We then went and watched Rango at the movie theatre. When we got there we saw a sign that said starting April 1st due to reduced funding they will start charging us to go to the movies. That really sucks! I think that was one of my favorite things about being stationed here. The movie was cute and had me laughing a few times. It's about a pet lizard that gets thrown from a car in the middle of the desert and how he survives. It has Johnny Depp doing the voice of the lizard. This is one of the movies that I would probably not go and see if I had to pay money for it, but because it was free we checked it out. I'm going to miss a lot of movies now.

I came back to my room and then finished my paper, that was it for the night.

Monday: I finally got to sleep in a bit on Monday. I was all out of sorts this weekend. I did my laundry while video chatting with my wife, but never got around to cleaning my room. I usually do a good cleaning each weekend, but I just never got around to it this weekend. When I finally thought about it I just didn't have the motivation. I did go work out for a bit, then it was back to doing some schoolwork which wore me out, so I took a nap…lol. I woke up and headed to the movie theatre once again and watched "The Fighter" with Marky Mark and his funky bunch. It was a pretty good flick, based on a true story. It's about a boxer late in his career with a crack addict brother and a pretty crazy family. He has to deal with all of that and try to make his final run in his career. Fun to watch, but this time I was all alone. It's just not the same going to the movies alone. Sometimes when I slow down and start thinking about my wife, my kids, my friends and family it gets really lonely. I try to keep busy and hope the time will pass fast.

A quick video I made to show those who don't know how screen golf works.