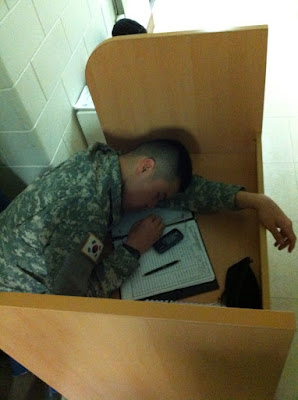 Our CQ desk on high alert! LOL - I couldn't help stopping and taking a picture of this guy.

Saturday: I slept in as usual for a weekend. I have not much planned this weekend at all except relaxing and getting healthy. I felt a bit better, except when I stood up I felt some mild nausea, not too excited about this new development. I video chatted with my wife for a bit, then headed to the food court to hang out for a while. I watched some of the NCAA basketball games and also brought my laptop so I could download some extra entertainment. I have to be careful when downloading in my room because we have a limit each month and I don't want to go over it.

PFC Pickle ended up calling and came to visit. We had lunch and then dropped everything off at my room before venturing down to the movie theatre. We gotta get in our free movies while we can. The walk took quite a bit longer than usual, I had to take a few breaks. The nausea would come and go and the coughing fits would occur here and there, but we finally made it and on time to watch "Paul". A comedy about an alien who gets picked up by a couple on a road trip. It has some funny parts, but is one of those movies I wouldn't have paid money to go see at the theatre. Good for a Netflix queue addition or a watch when it comes out on TV.

On the way back to my room I bought a big jug of orange juice and a bottle of NyQuil. I'm going to beat this sickness one of these days. I did some schoolwork and then relaxed and watched a couple TV shows. I then took my NyQuil and fell asleep.

Sunday: I slept in even later that usual thanks to the help of my NyQuil induced mini-coma, that stuff really knocks me out. I woke up and thankfully the nausea was gone. I just have the chest congestion and the coughs still hanging around. The day was not very exciting as I just wanted to rest and get better. I started laundry and then video chatted with my wife and kids. After that I took a nap, then checked in with the new guy in our office SPC Mick to make sure he's doing OK. I let him know to bring all his orders and ID tomorrow so he can get all in-processed. I also let him know I'll come meet him and we can walk to the office together. Next up…another nap. I then did my schoolwork and took another nap.

My roommate came back and said he's been sick all weekend as well. Sounds like he has the exact same thing I have naturally. Except when he is describing the phlegm in his throat he calls it fire. "I have a lot of fire in my chest". It's the small things that make my day….LOL. The day ended with some more TV shows and then going to sleep. Hoping tomorrow is much better. I'm starting to get a little nervous now that April is coming, which means my PT test is coming soon. I normally wouldn't be worried, but I can't imagine trying to run 2 miles with my chest like this. I want to be healthy and have a week or two to get back in shape.