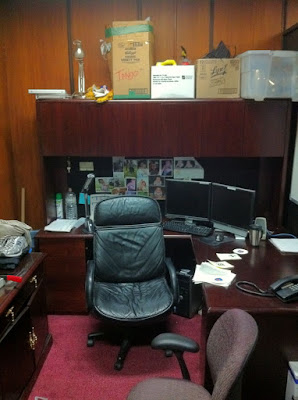 Just a photo I took of my desk and office area in the conference control room.

Work call this morning was at 0830 (normal time) and I actually went in at 0830 which was nice. I had a good sleep and actually felt pretty good before going to work. I had a chance to video chat with my wife for a bit which is always nice. We've been trying to figure out how to use the Patriot Express (Space-A Travel from Seattle to Korea) so she can come over with the kids for free and visit. It's been nothing except a very frustrating experience. There is an official memo from USFK that states that soldiers that are unaccompanied in Korea can have their family come once a year via the Patriot Express. The problem is that nobody seems to know what I need to do in order to make this happen. Everyone I talk to has no idea, or they make something up…or pass me off to another person who doesn't have any answers. I feel like pulling my hair out.

I went to work today and found out that the honor guard is doing a post-wide exercise. All the bridges over "shit creek" which I have to cross were guarded by soldiers in full battle rattle…no crossing. I had to walk around the block just to get to work. They also shut down all the gates except for two. It caused massive backups outside the gates and made SPC Roy and Special K's commute last 1 1/2 hours instead of 20 minutes or so. They randomly selected cars to search and people to search when they were coming in. There were Humvees everywhere and even sandbags setup with big machine guns posted. I had to show my ID just to get to work.

When I did get to work there wasn't a whole lot to do, so I started SkillPort again. Later on we went to the TMP and "checked out" our car for another week. We then played basketball again for lunch. This time we had a few more people from the office and our sister office come play. We played three on three. I was still pretty sore from yesterday and by the time we finished I thought I was going to die. My legs were like jello and my entire body was sore. It was a great workout, but I'm not sure if I can do this everyday.

After basketball I went back to my room with SPC Roy and took a shower, then we left and had lunch. We then went to our battalion headquarters and updated some paperwork we received an email about. I went to try and pick up my packet for BAS which I was told was denied. There is no sign of it. Sometimes I think the army just tries to make everything so difficult when it comes to getting money or a benefit so people just give up. My sergeant is going to go with me to the finance office tomorrow with the copies of all my BAS paperwork and try and get everything straightened out. There is still a small chance that I may get it, but I'm not holding my breath. I'm sure when we get there, they will tell us we need another paper signed by 5 different colonels and a general before they can do anything.

We then cleaned up from the one meeting that we had today. It was in the top secret conference room and while we were waiting for an escort, we chatted with the honor guard on duty at the desk. I hear they get in trouble all the time. SPC Roy asked if they had live rounds yet for the exercise and he said no. Then I heard the story about why they are not allowed to use live rounds anymore. I guess one of the guards was playing around with his pistol and accidentally shot himself in his foot. If that wasn't bad enough, he then shot himself in his leg. WTF? Since then there have been no live rounds given to the honor guard. I guess there are a ton of other crazy stories that these guys do, but I think this one tops them all.

After cleanup of the conference room we did a deep cleaning of the office…vacuum, dust everything etc. When we finished it was time to go. I swung by the PX and picked up a few supplies, then headed to my room to do a little schoolwork and then relax and watch a movie. Tonight's movie….The Road Warrior. The sequel to Mad Max which I watched the other day. It's an old movie, but still pretty good. It's definitely better than Mad Max. It has Mel Gibson again driving his muscle car in the future where fuel is hard to come by and he has to scavenge to survive. Lots of fast cars plus some blood and guts. Still a pretty good flick after all these years.