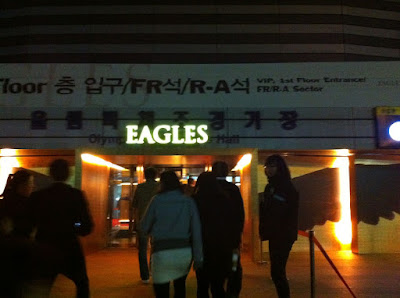 Outside Olympic Stadium in Seoul getting ready to see The Eagles!

Today was a pretty interesting day. Work call was at 0830. I got up and was ready early, so I could video chat with my wife before leaving to work. A little before 0730 I got a call from the air force master sergeant in our office telling me I had to come in early to turn the conference room equipment on for an unscheduled meeting. Great! I said goodbye to my wife and finished getting ready as quickly as possible. I then got a call from my sergeant and then from SPC Roy…I guess nobody communicates there. I made it down there and half the equipment was on (turned on by our sergeant), but if you don't do it in a certain order and correctly it will not work. I had to back up a bit before I could figure out why the projectors were not displaying anything. I got it figured out and then I was stuck there flipping the PowerPoint slides for the meeting. The air force master sergeant was pretty cool though, he brought me up some breakfast and OJ to eat while I was flipping slides. Pretty cool guy.

At lunch time we all headed out to the KATUSA cafe to get some Korean food. Our sergeant paid for all of us and asked us to bring him back some since I stayed at the office. This day is looking good so far…free breakfast and lunch! When I got back I went to the medical clinic to schedule my PHA (Periodic Health Assessment). My status changed to amber in AKO since it's been a year now from my last appointment. Once in the medical center I grabbed a number and waited, then finally after I was called I was able to make an appointment…first available date is on the 1st. They gave me a bunch of warnings about not showing up for it, I guess it's a problem there.

When I got back to the office I spent the rest of the day doing SkillPort. I like this somewhat normal schedule where we can get other things done besides just setting up meetings. Once the day was over I headed back to my barracks and changed into sweats. Since I didn't get out of work early, I didn't go work out…I just cooked a pizza and started my schoolwork. I then got a call from MWR. They told me I hadn't picked up my concert tickets yet. I told them no worries, I was planning on picking them up before the concert tomorrow. They told me that the concert was today and the busses were leaving in ten minutes. Holy Cow! OMG! POOP! I quickly got dressed and ran down to the Main Post Club which is a few blocks away. I was able to get my ticket and the air force master sergeant in our office. I had called him while getting dressed and he said there was no way he could make it (he lives off post). He got a taxi and came and picked me up, then we headed off to Olympic Stadium. Seoul is huge and traffic sucks at all times. I thought we would have plenty of time leaving the post at 0700 for the 0800 concert, but we made it with only 5 minutes to spare (and that was after just getting out of the cab early and walking the rest of the way once we saw the stadium).

We made it…we saw The Eagles live in concert! These guys are legends of rock with such great talent. All the band members can sing and they put on a great show. They performed some songs off their new album “Long Road Out of Eden (I didn’t even know they had a new album) and of course performed so many of their classic hits. I was surprised that they even performed some of the solo work from both Don Henley and Glenn Frey. I've always wanted to see them, but never had the chance. It's kind of funny that I was able to see them while half way around the world. The place was packed and I'm guessing that 90% of them were Koreans. Each of the major military posts bussed people here and we were able to catch the bus back to Yongsan after the show which was nice since it's faster and free. The great thing was that they played for 3 1/2 hours, the bad thing was that I got back to my room at 0100. Time to take a quick nap before work tomorrow.