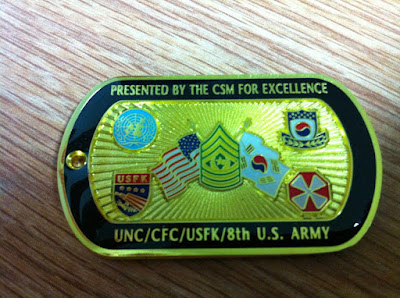 The coin I received today. Challenge coins come in a variety of shapes and sizes

Work call this morning was at 0500 once again. We loaded up as usual, but the 1st van I usually get in had some issues. One of their headlights was out, so they had to take a spare van. I usually ride with the admin master sergeant, an air force captain and our colonel. This was the first time we rode with these particular drivers. As we took off our colonel made a comment to the admin master sergeant asking if that was coffee or tea she was drinking. She said it was pumpkin tea, then the driver went over a speed bump without slowing down and the pumpkin tea shot up and a lot of it spilled on the colonel. The master sergeant was drinking out of a normal coffee cup and not a travel mug. She started trying to wipe the colonel down and I was laughing really hard (on the inside of course). It was pretty funny. The driver is lucky we have a pretty easy going colonel.

When we arrived at CP Tango I setup the secure laptops as usual. SPC Roy came in and was in an exceptionally good mood. It was a little strange. I started to think he took some drugs or something. Then he got all excited and said "I have to go take a dump" and off he went. A little while later he came back even more excited exclaiming that "it was above sea level". He kept going on and on about his poop. It was actually pretty funny. I ended up hanging out with him at the table in the office for as long as I could before I had to go do a little computer work in the IMO office. Our secret computer was quarantined because it hadn't been on the network since the last exercise, so no updates were installed on it. I have been working with the help desk trying to get this resolved and finally this morning the computer was up and running on the secret network (SIPR). I setup the admin master sergeant's email accounts on it (had to do a little thinking back a few jobs ago when I worked with Outlook and Exchange to setup two profiles…it's been a while). She was happy I was able to get it all up and working for her though.

Later on that day the 8th army sergeant major came in and started talking to me. He then shook my hand said keep up the good work and gave me a coin. Army coins are kind of like an "atta boy". It's a nice way for them to say thanks and give you a token of their appreciation. They are coveted items by most soldiers because usually you have to do something special in order to get them. I think my hard work all week splitting time between IMO and operations was noticed. I think I deserved a coin just for putting up with SPC Roy all week!

When we got back SPC Roy and I took the broken van to the repair shop to get it's headlight replaced. We then headed back and were given the safety brief. "Don't drink because you're on exercise and don't be stupid". That was it…we were released for the day at a little after 1500. I worked out and then video chatted with my wife for a bit. I then left to the PX and ate some taco bell and had some ice cream to celebrate receiving a coin…lol. Unfortunately I have to work tomorrow as well, so I'm going to bed early tonight after I do a little schoolwork.