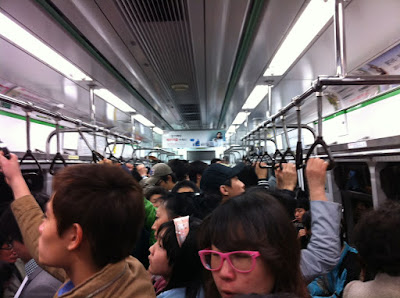 A view of the packed subway car we were in...people everywhere!

Saturday: I love weekends…I love sleeping in! After waking up, I did my normal Saturday routine of laundry and cleaning my room. I then video chatted with my wife for a while before doing some schoolwork. I met up with the young hawaiian for lunch at The Pizza School. I love that place, the pizza is pretty good and it's very cheap.

I heard that yellow sand was higher than normal today. SPC Roy had called me and told me that I may not want to hang outside too long today because of it. We were told about yellow sand during our in-processing. It looks just like smog around the city. The USFK website shows the current levels each day. It's basically a big dust storm that starts in China and blows down to South Korea. There are fine dry soil particles as well as pollutants from China in it, so it can be a little unhealthy to hang outside when it's high. It's also not a good idea to do any sort of physical activity if possible. I don't know if it was the power of suggestion or what, but I was finding it a little harder to breathe. I feel like I have a chest cold or something. SPC Roy mentioned that sometimes if there is yellow sand around (but not enough for a warning to go out) and we do a PT test, it makes it pretty tough to run the two mile. He said it feels like you're trying to breathe with someone sitting on your chest. Sounds like fun.

The young hawaiian and I decided to try something new and adventurous. We took the subway again and made our way to the COEX mall. This time we headed the right direction and made the switch to the correct subway line when needed in order to get there. The mall is huge. We had a good time just walking around and checking everything out. People watching is interesting as well. There is also a casino attached to the mall and we checked that out too. The young hawaiian showed me his favorite game of chance…baccarat. We played it a little while with $20 each. I just gave him my money and we agreed to split the winnings. I just wanted to see how the heck the game was played. After reaching around $250 with dreams of steak dinner in my eyes, we ended up giving it all back to the casino and instead we had $6 dinners that night. Luckily the mall had a lot of great places to eat and they didn't cost too much. Even though we lost, it was fun playing and learning the game somewhat.

SPC Roy called and decided to meet us at the mall on his way home from his in-laws. We had a few drinks and then we all went home.

Sunday: After sleeping in, I brewed my coffee and had breakfast. I then video chatted with my wife for a while. Just the easy going mornings with my coffee while video chatting with my wife is one of my favorite times during the week. I went over to the other barracks to watch the UFC fight which because of daylight savings now comes on at 1100, which still isn't bad. I was amazed at Jon Jones. I hadn't really watched too much of him before, but this guy has such a reach advantage nobody can get close to him. He just destroyed Shogun and took the championship belt from him with ease it seemed. Very impressing!

I then did a little schoolwork, video chatted with my wife some more and then went out with PFC Pickle. We had dinner at the food court and then went to the theatre to watch The Dilemma. A romantic comedy that was pretty decent. It's about a guy who finds his best friend's wife is cheating on him. He has to decide if he should tell his friend or wait until they finish a big deal first.

On the walk back SPC Roy called me and asked me to stop by the office to see when the first meeting is, that will decide when our work call is. I did and found out that there is a meeting at 0700…bummer, that means work call is at 0600. It seems no matter how early we go in, we always still get off at the same time or later.