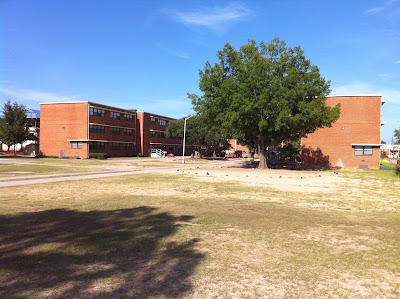 A photo of Charlie Company barracks as I walked by heading to RBK. The
barracks are the building to the left. The tree in the foreground
is "the smoke pit", the only place smokers in the company can smoke.

PT this morning was another good one. We have much better workouts over here than back at Charlie. We did a run and found ourselves at what the sergeant called "Victory Hill", he said "me and this hill go way back". (They are also in the process of changing the name of our barracks from RBK to something else more motivating. I guess the Lt. Colonel likes "Victory Barracks" so we may be going with that) We had to run up this thing as fast as we could...that was a killer. We then ran back and the Sergeant was able to find a few other smaller hills for us to run. When we got back everyone looked like they had just taken a shower in their PT uniforms.

The sergeant that does our PT in the morning seems like a pretty cool guy. I'll call him Sergeant Kent. He is 37 (a year older than me) and is in great shape. He always pushes everyone when we're out there. He tries to get everyone motivated and if we aren't motivated we end up doing extra push-ups or something until we get motivated LOL.

Lots of rumors today about another "Phase Back Friday" coming….I guess we'll see, but it really doesn't affect me since I'm at RBK. I just feel bad for the guys that are still there (at the company) and have to go through all the BS.

Today as we were marching to study hall there was a pretty funny incident. A big guy wasn't watching where he was going and actually ran smack into a speed limit sign. It made a loud bang as he ran into it and everyone almost fell out because they were laughing so hard. It was pretty funny. I haven't laughed that hard for a while.