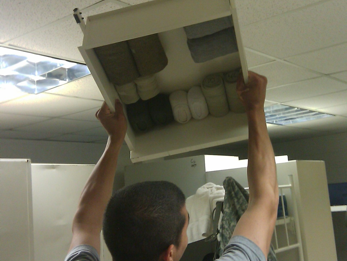 PFC Metal showing off his bottom drawer. He had everything tight and actually
taped to the bottom of the drawer so it would stay perfect for inspection.

I’ve heard from a lot of people who have been here a while, that there was a time with Charlie company when it wasn’t too bad. That all changed when Sgt. Cujo came into the picture. He started at Charlie about the same time as I did...lucky me. Sgt. Cujo used to be a drill sergeant and he still has the drill sergeant mentality of doing things. So we seem to have Sgt Cujo who likes to make everyone’s lives hell and the rest of the sergeants who just don’t seem to give a damn about anything.

This morning we woke up and again were told to wear ACUs, no PT this morning. After formation we were told to do a little picking up trash around the company area and then head to the DFAC for breakfast when it opened in about 20 minutes.

After breakfast everyone headed upstairs. Most people rested and some studied. Sgt. Cujo did not like this one bit, he had everyone get out of the barracks and stand in formation for 30 minutes just so we wouldn’t be inside the barracks. Then he let us go in the day room only, but we only had about 10 minutes until the school formation where we got to stand around again. Sgt. Cujo ended up marching with us over to school for the first time and when we got there he yelled at Delta company for using a bad word in a cadence when they were marching over. Someone may get offended. (The cadences here generally suck compared to basic because of this)

It just seems like he is always doing something to make the lives of everyone in Charlie company as miserable as possible.

Normal day after that for a while, school, lunch, school, then dinner. We had our normal Friday safety briefing (don’t beat your wife or your dog, don’t do drugs, don’t drink and drive). We then found out at our nightly formation that all Phase IV soldiers would be given a chance to phase up. It would be Sgt Cujo doing it tonight at 20:00. My excitement was dampened a bit, but I figured it’s worth a try no matter what. I turned in my policy letters that I had copied. A number of us arrived in the day room at 20:00 only to wait...and wait...and wait. We waited for about 2 hours until Sgt. Cujo decided to bless us with his presence. He then did locker inspections, but said they had to be up to standard and proceeded to hand us the new standards. So everyone ran up and had about 15 minutes to try and rearrange their lockers to the new standard. I did as best I could, my locker wasn’t too bad, so I was able to get it done. Sgt. Cujo then came through and did all the inspections. All the lockers in our room passed, but he did tell everyone he wants them to make them a little better and in a week or two he’s going to inspect them again.

We then took a written test on general knowledge including our policy letters, the chain of command, The Signal Song, The Soldier’s Creed, and the general orders. We had to score at least a 70% on it and I think I did, but I’ll have to wait and see. The whole process took 3 1/2 hours so it was pushing midnight before I had a chance to go to bed. At least I get to sleep in tomorrow.

Overheard Quote: “You always go into battle with a helmet right? Make sure to do the same if you’re having sex this weekend” (A captain giving us all advice during the safety briefing)