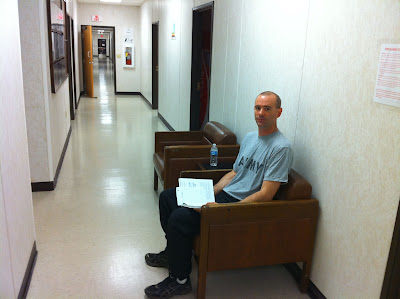 An "action shot" of me doing fire guard. I was actually studying for CCNA2.
At least we have some comfy chairs to sit it


This morning at 1:30 AM PFC Metal and I had our first hall guard shift at RBK. What a night and day difference between hall guard shifts at Charlie and RBK. At Charlie the shifts last 2 hours vs 1 hour here. At Charlie there are no electronics at all allowed during your shift, here we can use anything we want once we finish our duties. At Charlie there is no sitting (even on the floor) during your shift, here we have two nice comfy chairs with a little night stand between them for the hall guard shift to use. At Charlie they have to wear the full ACU uniform no matter when the shift is, here we can wear our PT uniform (shorts and shirt…what we have to sleep in, so we roll out of bed and we're ready to go). An hour really goes by quick. Our duties were to clean up the laundry room which was no problem and only took about 15 minutes. I played around on my iPhone the rest of the time and PFC Metal played his new Starcraft game until we woke up the next shift.

We were allowed for some reason to sleep in an hour later which kind of made up for the fire guard duty that we had to do. It would have been nice to sleep through the entire night and get the extra hour, but I'm not complaining. Charlie company didn't do PT and slept in as well, but this was all planned so they could do extra barracks maintenance in the morning. Since we are technically still part of Charlie company just living at RBK we woke up late and didn't have to do PT either. We just straightened up our room and had quite a bit more time to get ready in the morning which was a nice change. When I had breakfast I poured myself some coffee and had a plate full of food as well as a bowl of Cocoa Puffs. I was looking forward to having a little bit of chocolate in the morning. I decided to grab one of the little pints of milk instead of using the big dispenser to save a trip. When I poured the milk into my bowl it came out in chunks! Gross!! I guess I will not be having Cocoa Puffs this morning.

I mentioned about our new civilian teacher earlier. She is also down to business. She doesn't take any crap and even made a girl cry in class today. She told her to stop talking and to stand outside the door of the classroom with her notepad and take notes from there. The girl was in shock and just sat there and started to cry.

After class and study hall we had another long and pointless formation at Charlie before we could leave and head back to RBK. OMG I'm so glad to be living over there (I think I've said that a lot already). After the formation all the people living at Charlie had to do more barracks maintenance the rest of the night instead of having personal time. Instead of having to do any of that I was able to head back to RBK and call my family (my sister just had a baby today…woohoo!)