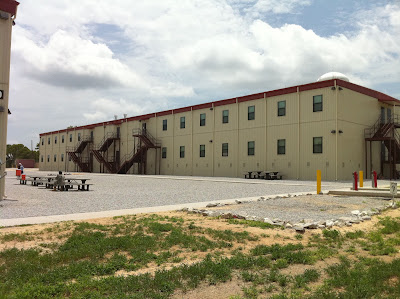 A photo of the outside of RBK. It looks pretty bland, but it is actually
very nice inside.

Today we had formation at 8:30 and as soon as accountability was taken we were released for the day. It seems strange not standing in a formation for at least a half hour to an hour doing nothing, I think I may like RBK.

Didn't do much in the morning. I studied a bit and cleaned the room. About lunch time me and PFC Metal walked over to the DFAC. During the weekends we do not have any DFAC open near us, so we have to walk about 15 to 20 minutes to our old DFAC if we want free food. When we got to Charlie company we heard that they were on lockdown. I guess some people came back drunk last night and one person came back without having a battle buddy (a big no no). I also heard the Command Sergeant Major came to the barracks and they were not very clean. Then this morning some of them thought they were released for breakfast and they went to Burger King. A sergeant walked in and took their phase badges, effectively phasing them down for 48 hours (unless the commander wants to do it longer). So there are a lot of them in ACUs on this hot day, and they have no privileges since they are on lockdown. I think I got out of there just in time!

The rest of the day was pretty laid back. I watched a movie on the laptop...The A-Team. I used to watch the television show as a kid and it was pretty good. A lot of unrealistic action adventure. Plus it had Rampage Jackson in it, who I like on The Ultimate Fighter.

Later on we walked on over to the Charlie Company DFAC again for dinner and headed to Charlie Company for the weekend recall formation. The sergeant did accountability and checked everyone's haircuts and shaves. (Luckily I shaved before heading over - for the second time today). Those of us in RBK then took off and headed back to our barracks.

We had a briefing at 2100 for all the new people at RBK from Charlie. The student leadership went over all the basics and what is expected here. They also answered any questions.

Overheard Quote: “Don’t take this the wrong way, but your wife has very large boobs!” (A private talking to PFC Metal while we were hanging out)