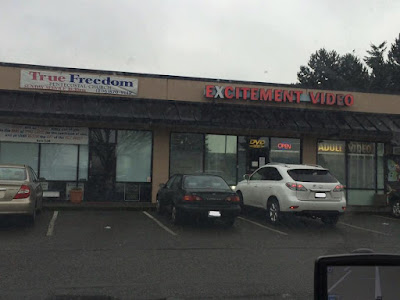 The True Freedom church right next door to Excitement adult video.
Not sure if the church wants members to have true freedom and
partake in the adult video, or if they are there to save Excitement's customers??

This morning I headed to the morning formation held at Keeler gym on Ft. Lewis in my ACUs, I had a 0800 appointment with my NCM. We had our formation, then they told everyone to head inside the gym. Once inside in one big formation, they had all people with appointments fall out to the rear. I fell out and waited for the first sergeant who came and asked each one of us when our appointment was. Once I said 0800 and she moved on, I headed out.

I drove to the WTB parking lot, ate my breakfast, then grabbed my blanket and took a nap. I headed up for my NCM appointment, but when I arrived at her office door it was shut. I went back out to the waiting room and called her number. Nobody answered, so I left a message saying I was there and would hang out for another 15 minutes or so. Once 15 minutes were up, I went to the SFAC and checked my army email.

At 0900 I had an appointment at the pain clinic. This appointment was with one of the doctors. I gave him an overview of my symptoms and a little history. He then explained a little more of what they do here. A lot of it is based on eastern medicine and ideologies. He has a very optimistic outlook and thinks they will be able to help me out a lot. This made me a little optimistic as well, I’m so tired of being in pain almost every single day…it can really make life suck! He said there was an opening with an acupuncturist tomorrow and had me make an appointment for that and also put me on the list for their program, which will eventually develop a personalized plan for me involving all the other areas such as chiropractic and massage therapy. I’m actually a little surprised the army is offering these alternative solutions, but I’m very grateful to have the opportunity to give them a try.

I then headed to my next appointment which was an ACAP follow-up. I found out they keep changing the requirements, so now I have a little homework that I need to do before I see him again in three months. It’s not a lot really, but I have to fill out a number of sections in their workbook and also show proof of a job that I’ve applied for and also have to show that I have three references.

I then headed to the WTB bathroom and changed into my civilian clothes. I drove to my best friends new restaurant that he’s running to check it out. We had lunch together and we hung out for a while. After that I drove up to Sultan and hung out with my kiddos after they got out of school until my daughter’s basketball game. It was a lot of fun to watch her play and win, but I didn’t get home until after 2200…then I had to do my schoolwork.