A Turn for the Worse - (MedBoard: Joint Base Lewis-McChord) Day 222 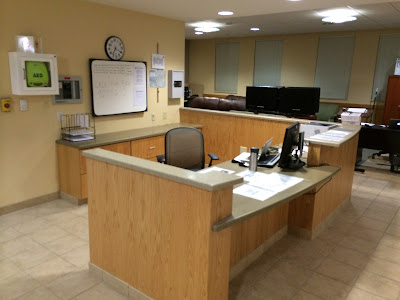 A view of the Staff Duty desk where I spent one of the worst nights ever!

As of midnight, I’m still on staff duty along with the beginning of a new day. My headache just continued to get worse last night and into today. It eventually got to the point where I felt nauseous. This is quickly turning out to be one of my worst staff duty shifts ever. I still have a long time to go, I have a migraine coming on, and my pain medications do absolutely nothing when I am getting a migraine. I do have special migraine medication, but I left that at home because I don’t get them as often. At about 0200 as I was sitting at the staff duty desk I could feel my mouth starting to water. I had been feeling nauseous for a while now, but this was more than just feeling it…it was coming…and soon. I quickly got up, head pounding, and made my way quickly to the bathroom. I then assumed the position…kneeling to the porcelain god…and proceeded to throw up in the toilet. There goes all that good teriyaki from earlier.

After throwing up, I made my way back to the staff duty desk. This wasn’t going to cut it, so I moved to an area right next to the desk. This area is used by the soldiers in the barracks to hang out I guess. It has a few computers, a TV, and most importantly a leather couch. I got comfortable on the couch, watched some news on the TV and fell in and out of sleep. The entire time my head continued to kill me…this is misery. The pain in my head continued no matter what, but any movement made it worse…so I tried to stay as still as possible.

I headed back to the main staff duty desk to join my squad leader at 0630. I must have been looking pretty bad, because he told me I could just head home instead of staying there until 0800. I was glad to be able to leave, but the drive home was horrible. Traffic was fine, but my head felt like it was going to explode. I hated every minute of the almost hour long drive. When I did get home I quickly climbed in bed and actually did fall asleep until 1300. When I got up, I was still in extreme pain. For any of you that have never had a migraine, you are very lucky…just imagine the worst headache you’ve ever had and multiply it by 100! Life just sucks when a migraine is happening.

I couldn’t do much of anything the entire day because of the pain. I just continued to lay in peace trying not to do anything to make it worse. My wife came home and we went to dinner at her parents. My father-in-law tried to massage my shoulders because they were so tight. Once he got tired my wife picked up where he left off. It felt good, but the pain never went anywhere. When we got home I took muscle relaxers and NyQuil before bed. Not only is my head feeling like it’s going to explode, I’m also coming down with something. I’m coughing and my nose is stuffed up. I dread each cough because they bring with them lightning strikes going through my head. Life is miserable.

I slept until about 0300 thanks to the drugs, but when I woke I was still in a lot of pain. I took migraine medication Maxalt and laid back down. After about an hour I could feel my head start to get better. I was able to get some more sleep, but my neck and shoulders are very sore…and I’m getting sick.