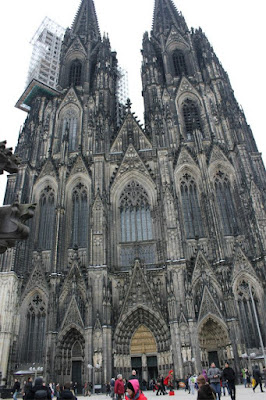 The front of the Cologne Cathedral

Friday: My wife had to work today, so I took her to her office and dropped her off. I stayed home and took a nap first and foremost. I then basically just hung out watching TV and doing a little schoolwork until I could go pick her up from work. We spent the evening going to the theatre on post and watched "Gangster Squad", which was just up my alley…lots of action and violence.

Saturday: In an effort to get out and about again, we decided to take a road trip to Köln (Cologne) Germany. We have heard from others that they enjoyed this city and we have yet to visit. The drive is a little over two hours and for whatever reason it seemed that I had to go pee the entire time! I went before we took off, then we also made a pit stop at a rest area along the autobahn. The rules at these rest areas are quite a bit different than ones back in the states. A bus was unloading as we pulled in and what seemed like the entire busload of guys was lined up outside and relieving themselves. There was a line of guys making yellow snow! This is just something you wouldn't see in the states, but things are different here. They did have bathrooms, but it seemed nobody wanted to wait and nobody really cared if they just had to go pee. It wasn't just the guys in the bus either, cars were pulling up and people were getting out and going pee in the snow. One of the other things you have to get used to about relieving yourself in Europe is the fact that a lot of the bathrooms cost money to use. It can be as little as 20 cents to a Euro.

We finally made it to the city and found a parking garage in the city center next to the main cathedral. After grabbing a quick bite to eat, we headed to the church to check it out. The building itself was pretty impressive, with two large towers looming high above the rest of the neighboring buildings. There were statues around the entrance and once inside we were amazed at how huge the place was…and also how cold it was inside. I could still see my breath as we were walking around. There was a worker making sure everyone took off their hats once inside. We took our time admiring the various sculptures and stained glass, then headed off down a shopping street filled with a ton of people. We took a few breaks inside some various shops just to warm up a bit before moving on.

We then visited the National Socialism Documentation Center, this was the headquarters of the Gestapo in Köln and has now been turned into a Nazi museum. It was pretty interesting checking out all the pictures, but the most interesting part was the basement. This was used as a jail by the Nazis and is still very well preserved. There are a lot of inscriptions from various prisoners. A chilling reminder of what life was like for the unfortunate that had to spend time there.

With the weather being so cold and my wife not feeling a 100% we decided to call it a day, but we do have plans to come back and see some more of the town.

Sunday: Today we pretty much just chilled together, we did a little cleaning and a little laundry…typical Sunday stuff. We then headed over to our CAM's house and met up with my boss and another NCO from the maintenance side of the ComSec office. We had a bunch of food and drink while we watched the NFL conference championship games. It was nice to see everyone again and just hang out and have some fun together. My boss told me that I will be going to Wiesbaden after Heidelberg. This is good news, but I can't pin all my hopes on it until I actually see some orders. Things change so much, it's hard to plan too early for anything.

Monday: A pretty laid back day. I was going to meet up with a high school acquaintance that lives here in Heidelberg, but the snow caused some problems with the train schedule and he was unable to make it. So instead my wife and I just hung out together all day…we didn't do a whole lot except TV and some schoolwork.

I've been thinking quite a bit today about my future in the army and here in Germany. I'm hoping that Wiesbaden will turn out to be a lot better than my time in the army here in Heidelberg. There are still a ton of places that I want to visit while I'm here in Europe. I would also like to have a good experience with a job in the army, I would like to learn something new, I would like to feel that I'm advancing in my career field. I also want to finish school while I'm here in Germany using tuition assistance. It seems that tuition assistance is always in a position to be cut when budget talks are going on. I have 7 more classes to complete in order to get my degree. The downfall is that I do have health issues that I'm dealing with. I know I could just deal with the pain and go on, but I don't want to end up even more injured once I get out of the army in a couple years. I guess I'll just take it one step at a time as I have been…but the sound of moving to Wiesbaden makes me feel a little optimistic.

Photos from our day trip to Cologne in the slideshow below:
Edit: Flickr ended up deleting the slide show I made, so I grabbed this one: 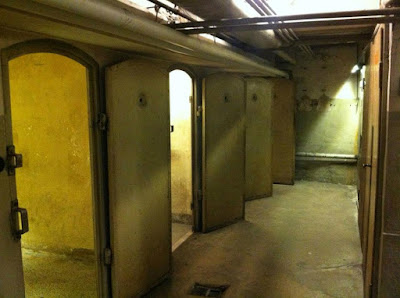