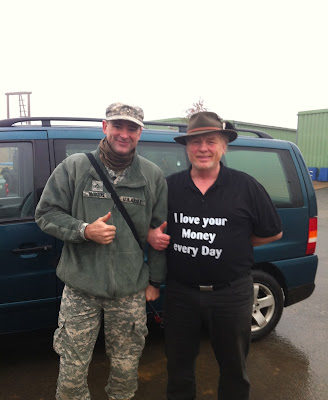 Me posing with the "Gut Truck" owner. I thought his shirt was pretty funny :)

We had an early wake up this morning at 0510…why so early you may be asking yourself, because I was wondering the same thing. We had to get ready and get everything packed and put outside the barracks by 0700. No problem…I still don't think we had to get up so early…especially when the DFAC wasn't even open anymore.

0730: Barracks inspected by a CPT and then we are locked out.

We're told the bus should be coming at 0930…it's cold. The gut truck comes and we go order some pastries. He gets so many requests for coffee, he quickly drives off in another car to fetch some, while his wife works the grill serving up brats and steak sandwiches along with the pastries. An hour passes before he comes back and I'm still there waiting. He gives away the coffee for free which is awesome. I enjoy a nice cup of Joe and then wait back outside the barracks.

0900: Everyone lines up and does a police call around the barracks area. We continue waiting for the bus.

1100: The bus finally comes, we load up and head out finally. It's good to be inside and warm again.

1211: The bus gets pulled over by the Polizei. The driver was going too fast on the autobahn. Yes…there are places you can go too fast…especially if you are a semi or a bus!

1430: We finally arrive back in Heidelberg after missing the first exit. We unload our equipment and then put it in the office before heading over to turn in our weapons to the armory.

So my final thoughts of the exercise…I think it was a huge waste of my time. It's really pointless for them to send us out to the field to train on infantry type stuff. If they end up putting me…a computer geek out on foot patrols and breaking down doors to take rooms, I think we should just give up whatever conflict we're in. It just doesn't make sense. The army has all kinds of infantry soldiers who's job it is to do this kind of stuff. These soldiers train for this all the time…it's what they do. Why on earth would the army send a computer geek into this kind of stuff? Why do we do field exercises training for this kind of stuff? If they want us to do a field training exercise, then have us setup computers and a network out in the field. Have us try and communicate with headquarters. Have us actually train to do our job in the field. Does the army only know how to do field exercises that involve infantry work? 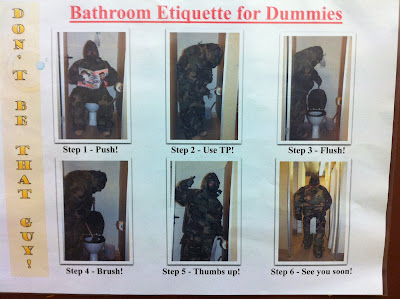 A sign on the bathroom door during the FTX 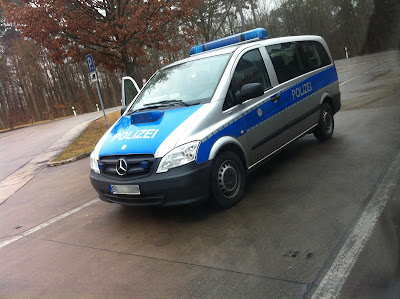 Yes...the police pulled over our bus in their mini-van...LOL