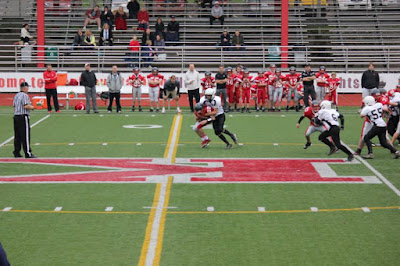 My son sacking the quarterback :)

This morning I sent my squad leader a text reminding him that I'll be a navy intern today. I headed into my office with the navy and did the usual morning routine which consists of checking both my navy and army emails, then surfing the web. They brought in two laptops that needed to be imaged and gave me a DVD with the image and another with some drivers and software that will need to be installed after imaged for a third party device. I gave it a few efforts, but the way they told me to image the laptops did not work. One of my co-workers tried a few things without any luck. I then started doing a little research. I think I found the resolution, but did not have time to complete it before lunch.

When I left for lunch I let my co-workers know that I had to leave for the rest of the day. I let them assume that I had an army appointment, but what I actually had was something far more important. I ate my lunch in my car and drove to the ferry terminal. I had to catch a ferry and then drive to King's high school. My son is playing his last football game vs. King's and I didn't want to miss it. I haven't had the chance to see any of his games yet, so I wasn't going to let anything get in my way for this one. These are the types of things that you can never go back and redo. The game was great, my son got three sacks on their quarterback and also received a touchdown pass. I couldn't ask for anything more. I had a blast watching him and I could tell that he really enjoyed that I was able to make it.