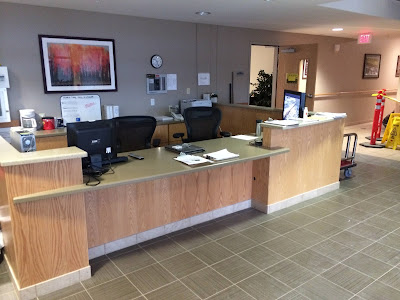 The Staff Duty desk for the WTB.
This is where I spent the majority of my time while on shift

My wife and I spent Saturday cleaning and unpacking everything. We have a lot of crap! Sunday we went to a lunch show with my sister and her husband to celebrate my birthday. The place is in Seattle and called Teatro Zinzanni. Luckily we made reservations for the lunch show, thinking we would just hang out in Seattle for the evening afterwards. The show was part comedy and part entertainment…it was a lot of fun! We had a table in the front and both my brother in law and myself ended up being part of the act.

Once we left, we made our way back to the Seattle waterfront, but on the way to the ferry, we ran smack into HempFest. With weed being legal now in Washington, HempFest was probably bigger than ever. The smell of pot was everywhere! We took a detour just to check out the booths and people watch, then proceeded back towards the ferry. I'm afraid if I hung out there too long, I might test positive on the next pee test!!

I headed home and changed into my uniform, then headed into the WTB unit for my staff duty which started at 2000. I took my medication at 2030 and also took a Percocet. I didn't have a headache yet, but I could feel one coming on. The meds I take at night also make me sleepy. If the army is going to force me to do staff duty, they can't stop me from taking my medication. Might as well be feeling good while I have to do this stupid shift.

I did my schoolwork and played around on the internet for a while as I was sitting at the desk. The only real action I had was answering the phone once while the NCO (our platoon sergeant) was on another call. The call was only the hospital staff duty doing a phone check. The platoon sergeant is pretty cool and very laid back. I'm also glad we didn't have to do janitorial duty like I did during staff duty in Germany. The night was pretty boring…but I was feeling good at least…but starting to get really tired.