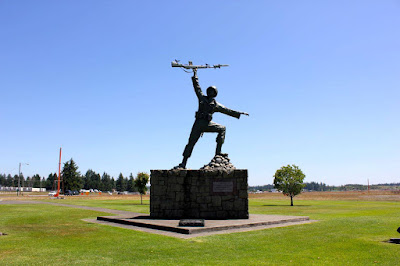 A photo I took of The monument to the "Steadfast and Loyal Infantryman
of the Famous Fourth" located on Ft. Lewis.

This morning as I was getting ready, I received a text from my squad leader letting me know that formation has been changed to 0800. I texted him back letting him know I wouldn't be there because of ACAP. I was able to take my time getting ready because of this. It was nice because I didn't shave and I just threw on some civilian clothes and then headed in.

At ACAP today we went over the resume some more and then focused on the cover letter and interview. We broke for lunch, which I had in my car while listening to music. When we arrived back to the classroom we had to gather in groups of 4 to 5 people. We then did a mock panel interview session with each other. We had various questions that we could ask, and we just took turns with one person being the interviewee, while everyone else asked a question.

During the class I received a text from my squad leader telling me I have to do staff duty Sunday night to Monday morning. WTF? I texted him back letting him know that I had an appointment Monday morning, but he responded stating there was nobody else and I had to cover the shift. By this time I was pretty pissed off. Mainly because I had plans Sunday night to celebrate my birthday, but now I'll end up turning 40 while at the staff duty desk. Not how I imagined crossing this milestone for sure. I don't know why I found out last second, and I'm sure there was someone else available from our entire company…but not much I can do about it except be pissed off.

I wasn't even able to concentrate for the rest of the ACAP class, all I could think about was how much I hate the army. I really can't wait to go back to a normal life and a normal freakin' job. I drove home angry, which is never a good thing…everyone and everything was pissing me off. I had road rage to the extreme. Normally I'm a pretty calm and collected guy, but getting screwed like this just really rubbed me the wrong way.

Email ThisBlogThis!Share to TwitterShare to FacebookShare to Pinterest
Labels: 25B, ACAP, Army, medboard