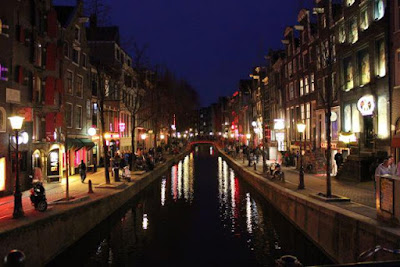 One of our favorite pictures from Amsterdam...this is
the red light district at night

This four day weekend we signed up for a trip to see "The Best of Holland". It was a pretty amazing trip. We spent the early hours of Friday morning sleeping on the bus. We arrived in the city of Alkmaar where the bus dropped everyone off at 0800 and told us to be back at 1230. It was extremely cold out and it was hard to find anything that was even open at this time. As we walked around we quickly found out that Holland is extremely bicycle friendly. It seemed like there were a lot more people riding bikes around than cars. You also learn really quick to stay out of the bicycle lanes, they will just run you over! We found a coffee shop and spent some time in there trying to warm up. At around 1000 we ventured out once again and eventually found the cheese market. This was the main reason we made the stop here and it was pretty cool to watch. There was big wheels of cheese everywhere being sold to resellers. There were also a number of vendors around giving out samples of cheese. They were all so good, we ended up buying a couple different types.

We then headed on the bus to visit a cheese farm and shoe factory. We watched as the owner made a wooden shoe in about five minutes with the help from one of the kids in our group. We then learned all about how they make cheese at this farm. We were given several samples and they were all so good, we ended up buying even more cheese!

We then headed to our hotel which was near the Amsterdam airport. Once checked in and settled, we took a nap…the day had been long and the sleep on the bus was intermittent. We got up around 1800 and took the free shuttle to the airport, where we then took the train to downtown Amsterdam. We walked around and eventually decided on a place for dinner. This first night was just a bit of looking around and checking everything out. The city is pretty amazing with all it's unique architecture and canals running through it. It is also famous of course for it's legal use of drugs and prostitutes. It seemed everywhere we turned there was a "coffee shop" which sold much more than coffee. The smell of weed was abundant as we strolled around the many streets. We walked around the red light district as well, where there were many women behind glass doors trying to get business from all those who passed by, we saw plenty of men coming and going keeping these girls busy. Every guy coming out of one of those glass doors had a smile on his face...lol.

Our next morning consisted of a bus tour around the city with a local guide explaining a lot of the history. We were then dropped off in the middle of the city for the rest of the day. We wandered around checking out the various shops and taking many pictures. We happened across a flash mob, which staged a very large pillow fight. Pretty interesting to see, and the aftermath with all the feathers and other stuffing made it look like it just snowed.

The final day of our trip had us checking out of the hotel and heading back home with a stop at the Kuekenhof flower gardens. This place was huge and had a large number of tour busses already there. Unfortunately spring has started a little late here in Europe and most of the flowers outside had not yet bloomed. We could tell how amazing it must look and we also saw a lot of photos in the souvenir shops. We did check out the large green houses which had an amazing number and varieties of tulips. My wife had a great time taking some pretty awesome shots of the flowers.

We arrived home at about 2000 and had SPC Mac come over to visit for a bit before turning in and sleeping hard. We spent Monday recovering and just hanging out at home…being a tourist takes a lot out of you!

I've broken all our photos down to each day of our trip below...

Edit: I had a ton of photos, but Flickr deleted the slideshows I made when they changed their service from free unlimited to a paid version. Instead I'm just going to post a few of the pictures below: 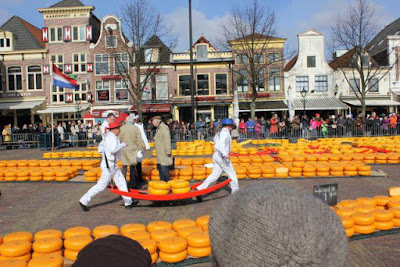 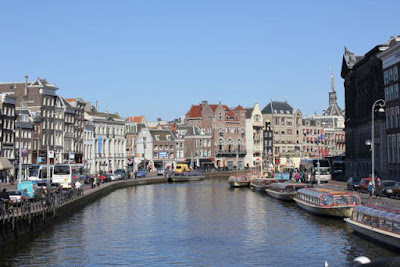 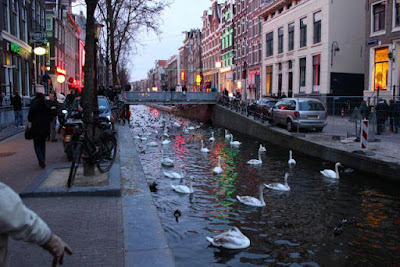 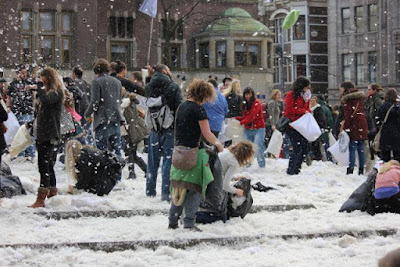