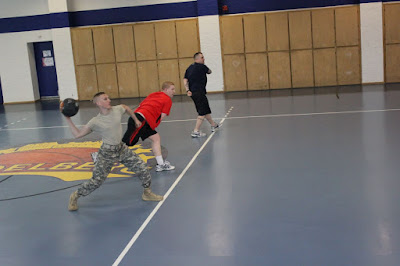 Guys from my platoon on the attack

This morning we formed up in winter PTs at Campbell gym. The normal folks did regular army PT while those of us on profile headed to the gym. I worked out on the weight machines and had a good workout.

I arrived in my office and went through my email and checked my "to do" list which has been growing as I add everything I need to get done in order to leave here. There are a ton of little things that need to be taken care of and I want to make sure they are all done in a timely manner. I headed to Subway at 1030 to pickup a couple of party platters for the chaplain's prayer breakfast. He told me I could grab a couple of sandwiches, which I did and then headed to my wife's office. We had lunch together and I hung out there for a bit just wasting a little time…well it's not a waste if I'm spending it with my wife.

I then headed over to the in and out processing center for an out-processing brief that I had scheduled. They went over a number of things such as how to clear housing and transportation, medical, and various other items. We were given a bunch of paperwork and then sent on our way. If I would have gone to this brief first, I would have known to take my motorcycle registration to transportation!

I then headed to the barber to get my head shaved. Normally this is a non-event, but this time something very wrong happened. It started off normal enough, but near the end things went off track. Instead of using a brush to get all the hair off of my neck and the back of my head, the barber leaned in and started to gently blow on me. It freaked me out! I looked in the mirror to verify that this was actually happening! I'm going to assume this must be a German thing, but I don't think I'll be heading back to that barber shop again.

The end of the day was spent watching dodge-ball. Our company was challenged by the HHD company to a dodge-ball game. Of course I couldn't play, but I decided to show up and support those that could play. I brought my camera and took a bunch of photos. Normally I wouldn't do this because it was not a mandatory event, but I've been trying to do my best and be positive. I've also wanted to make a better impression with our platoon sergeant…which it did. He thanked me for coming and shook my hand before I left. I want to stay on all the leader's good sides until I leave. I don't want any trouble, I just want everything to go smooth until I get out of here. If that means showing a positive attitude when possible and going a little out of my way, so be it. 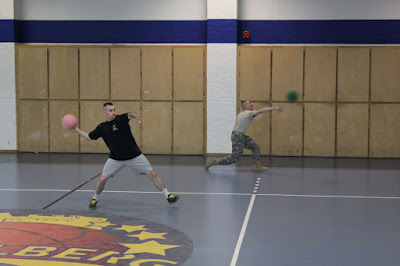 Guys from my platoon on the attack some more 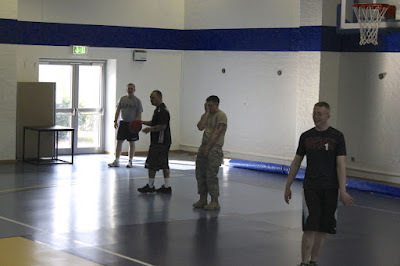 Guys from HHD getting ready to start 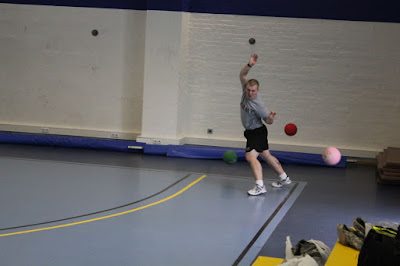 A guy from HHD trying not to get hit