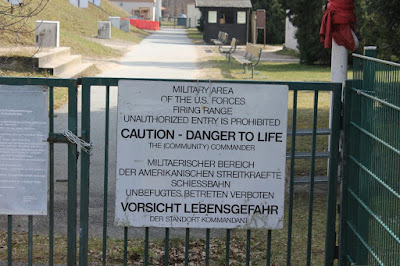 Where most of our platoon is today...a picture I took while we were paintballing
the other day. The paintball course is next to the range where we qualify with our rifle

This morning we formed up for PT at Campbell gym in civilian clothes. There were only 6 of us total because everyone else was headed to the range and then the gas chamber. I think they were planning to do a run off post, but instead the platoon sergeant had everyone just do their own thing in the gym. I had a great workout with the weight machines.

I headed into my office and checked my email. I got a call from the AIC supervisor (the garbage man) because my number is the only one he has saved in his phone. He asked if I could check and see if anyone is coming out today, but said he did almost everything yesterday…only the TMPs would need to be dispatched and about 6 garbage cans checked on the two outer posts. I told him I'd take care of it. The chaplain is out on leave and I didn't have anything better to do.

First I spent some time doing schoolwork and then went around and took down the paintball flyers. I stopped by the ComSec office to check on the status of my leave request…our CAM said she would check on it. I then headed out early for lunch at about 1100 and stopped by guest lodging to reserve a room for when we final out of housing. Interestingly enough, the guy there said I have to email the request…they don't do reservations in person. So I'll do that tomorrow, again...I'd like to try and get as much done as possible before I go on leave.

I had lunch at my house, changed into civilians, then headed over to the AIC office and drove one of the TMPs to the dispatch office. I turned in the paperwork for both TMPs and received new paperwork, so they are good to go for a couple more weeks. I filled it up with gas, then changed out 3 garbage cans on this particular post. I then drove over to the shopping center and changed out 4 more cans. I drove back to the AIC office and unloaded all the trash and then drove the other TMP to fill it up. I finished up about 1500 and called it a day and went home.