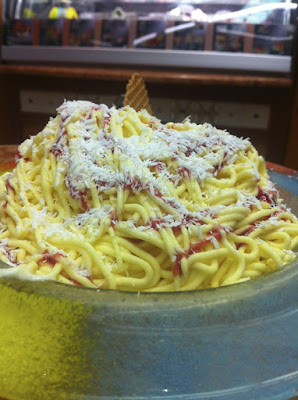 Spaghettieis!! One of my favorite desserts from way back when I was
an exchange student...ice cream made to look like a plate of spaghetti

This morning for PT I came in my ACUs. I was designated to be a road guard for the PT test. So during everyone's push-up portion I just sat around and chatted with the other designated road guards. For the sit-up portion I was one of the designated feet holders. Finally for the running portion I put on a reflective vest and stood on the road making sure that no motorists ran over our runners. After PT I followed SPC Mac to the auto detailer so he could drop off his car. Cars have to be spotless when shipping them back to the states. The shipping inspectors go a little overboard when checking out the cars before sending them back to the states. If there is dirt anywhere including the spare tire, the engine, or any other nook or cranny they can find, your vehicle will fail inspection and it cannot be shipped. This particular detailer guarantees that the vehicle will pass inspection, so both SPC Mac and I decided to just pony up the dough and pay to get it done. I gave SPC Taylor a ride home and then ended up taking him back into work once we were both ready.

In my office today I was able to get my schoolwork done as usual. I also finally made contact with my future platoon sergeant at the WTU in Ft. Lewis. I sent him all of my info including my flight itinerary. Now I don't have to wonder what I'll need to do once I arrive. I then went through my email and backed up any important info from my computer. Today will be the last time I use it. I made my final Tuesday run to Subway to pick up the party platters for his lunch bible study. The chaplain told me to grab some, which I did and headed to my office. I ate, shut the door, and then took a nap.

After lunch I basically just surfed the web and passed the time until 1700. I then headed over to staff duty and spoke with SGT Steroids who was on duty. With the new schedule where he is on call, I asked him if he wanted me to call him at midnight and wake him up…or if he wanted to just sign me out on leave at his convenience. He obviously chose the latter. Now I just have to hope that he does indeed sign me out on leave…I don't want any issues while I'm out. So I'll be on leave for the next 20 days…my next post will be after that with a short wrap-up. My mom and aunt are coming to visit Germany while I'm here, and I'll be playing tour guide.