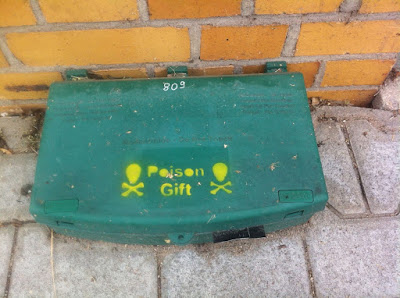 These are seen around post housing...to kill the mice and rats I imagine.
Ironically the German word for poison is "Gift"

This morning we had PT at Campbell gym in civilian clothes. We didn't even form up, but kind of gathered around our platoon sergeant sitting on the bleachers and listened to some announcements. We all then were dispersed to go workout on our own in the gym. The gym has become somewhat of a ghost town lately. With the closure of Heidelberg, there have been a lot of units that have already left. It's quite a stark contrast to when I first arrived here and every cardio machine was always occupied. Today I worked out on the weight machines and had a pretty good strength workout. As our platoon sergeant was leaving he told me I had to attend a VTC (Video TeleConference) this morning and to be there at 0845. This particular conference is specifically for NCOs and specialists that have made promotable status, I shouldn't even be going. The army is all about appearances though, and our platoon sergeant wanted to make sure all the seats were full for this VTC training. Another instance of "checking the box", just doing something for the sake of doing it…not because it's going to be actually useful.

I headed home and got ready, then my wife and I headed out for work. For some reason traffic was crazy, so I ended up having her drop me off at work instead of the usual routine with me dropping her off first. I arrived just in time and grabbed a seat. The VTC consisted of the entire brigade and on screen you could see a small live feed of each battalion with the brigade CSM taking up the large center portion. I'm not sure who setup the camera on their end, but all everyone saw the entire time was the CSM's crotch. He would pace back and forth talking (CSMs can talk forever) and all we saw was his crotch going back and forth. He went on about being professional and mentorship for 2.5 hours. The only phrase that stuck out was when he mentioned that America owes a lot of other nations money. He then asked if anyone knows why they don't come and collect…it's because we have the best military! That's just great logic <sarcasm> and it should not be something the brigade CSM is telling everyone. He's basically saying "it's OK to borrow money and never give it back if you're big enough and strong enough". The problem is that if you do that, nobody will ever loan money to you again, then are you just going to take it when you need it? Sounds like robbery to me.

Just when I thought everything was over and they shut down the VTC at our normal lunch time (1130), our battalion CSM in the room with everyone said he wanted his time now. He continued to talk for another half hour…I think my eyes were starting to turn yellow by the time he finally let everyone go at noon. Maybe drinking all that coffee was not such a good idea, but at least it did help keep me awake through the whole thing. I quickly exited and headed to the bathroom. What a waste of a morning…I really can't wait until I start my leave.

I ended up getting lunch at the subway in the food court and bringing it back to my office to eat. After lunch I did my schoolwork and the usual…check email and surf the web until the end of the day.