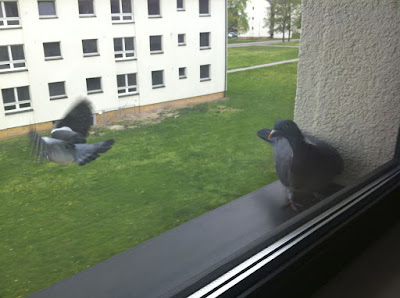 The pigeons like to hang out on our window

This morning we had PT at Campbell gym in civilian clothes. Those of us on profile headed to the gym and did our own workout while the normal folks did a half hearted attempt at a run. Our platoon sergeant put our useless sergeant in charge of PT before he left for an appointment. The useless sergeant had everyone do a run off post to the hospital and back, which is a short run already. Half way to the hospital I heard he told everyone to turn around and come back…when they all got back he said they were done for the day. So a few of the soldiers ended up coming into the gym to finish a workout on their own. I worked on the weights and had a good workout.

I headed into my office and did what has become my normal routine…schoolwork, check email, and surf the web. I'm trying to wrap up this particular class I'm taking before I go on leave next week. I have 2 weeks worth of work to finish before then, so I'm grateful for all the time I have to do schoolwork at work. It may not be the best use of taxpayer's money, but then again I think half the stuff the army does is a waste of time and money.

I headed home for lunch, then back to work. I spent the rest of the day surfing the web and playing games to pass the time. I took a couple things out of the office to the dumpster. Next Tuesday I hear that we will be moving the furniture out as well. Right outside the ComSec office they have a large machine with a huge mechanical claw along with large waste containers that they move in and out as they get filled up. The big claw has been taking from large piles of chairs and office furniture that each office has just being dropping off in big piles and putting them in the very large waste containers. It's too bad the base can't sell or give this stuff away, because a lot of it is still in good condition, but it's all just getting tossed. My office is pretty much good to go, I've cleaned it up and thrown all the small stuff away.