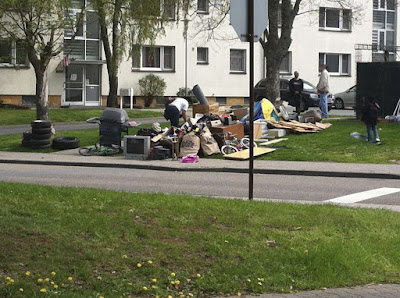 A view of all the crap that people just leave behind.
During spring cleaning it's all put next to the curb for
the bulk garbage man to come collect.

This morning PT was at Campbell gym in civilian clothes. It's "Regimental Week" (whatever that involves), so there were actually only 4 of us there for the formation. The rest of the people were doing a run somewhere far away. I'm just glad they didn't make those of us on profile go and watch or something stupid. I'd rather at least get a workout on my own, which I did…cardio on the stationary bike.

This morning after getting ready, I took my wife to work and came back home. Today is our building's spring clean-up and everyone that lives in the building is supposed to show up at 0900 and help out. I don't mind because I get to wear civilian clothes and I don't have to go into work. We ended up moving a lot of stuff to the curb for bulk pickup to come get. There was a lot of stuff left in our building from various people that move out and just leave their crap in the attic or basement common areas. They don't want to ship it and they are too lazy to move it to the curb for bulk pick-up themselves. Sometimes I think that army families may be some of the laziest I've ever met.

We moved all the crap, took some BBQ grills over as well and then used an outside vacuum to pick up leaves and debris around some of the stairwells in the back. The place looks 100% better now and we finished by 1100. I'm scheduled to do this all day, so I just hung out at home until about 1400 when I headed off to cancel our cable TV (the service isn't that good and we don't ever watch it...one more thing I can cross off my PCS checklist). I then picked up my wife and had her drop me at the TMP office. I had to pick up a TMP for tomorrow's drive with the chaplain. We're leaving at 0630, so I needed the TMP at my place to leave first thing tomorrow morning.

The rest of the day was spent doing some schoolwork and then watching the original Rocky. It's been a long time since I've seen that movie! I forgot how slow it takes to get going.