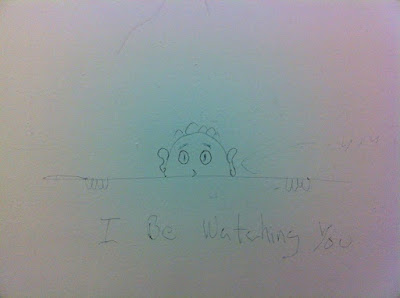 Graffiti on the bathroom wall in the food court...there was also
strangely enough some algebra equations as well that I almost took
a photo of.


This morning for PT we had a PT test, which meant it was at Campbell Barracks, and we had to be there at 0600 instead of our normal 0630 PT time. I arrived along with everyone else and we assembled in the gym. My current profile prohibits me from doing anything in the PT test. I plan to have that changed once everything is figured out, but until then the only thing I'm allowed to do is work out with weights and use the stationary bike. So I basically stood around and watched everyone. I held a couple people's feet on the sit-up portion and encouraged people on the run. I then went and watched people get their height measured, then weighed. I think my normal workout would have been a little more productive, but such is life. I'm sure I'll be on the list to take the PT test each month until I can actually take one. One surprising thing was that SGT Mex did not pass the tape. He was on the overweight program and after 3 months was able to get off, but is now back on it. According to the regulations he will now be discharged from the army. We'll see what happens.

At work it seemed as though I was never in one spot for too long. Every time I sat down at a computer and started doing my schoolwork, someone else needed to use it. I must have moved about 6 times throughout the day, when I was able to get a spot at a computer. I was able to finish most of my schoolwork before lunch, which I took as usual in my car along with music, my book, and a nap.

Back in the office after lunch I was able to finish my schoolwork. I then contact a couple of my customers to remind them about destructions for their ComSec material as well as schedule some dates for their required briefings. After that it was just a lot of web surfing. The maintenance side of the office is already in high gear, getting prepared to close down their side of the shop. They have already turned back in all their maintenance equipment a while ago, but now they are going through all the old manuals and shelves full of material and shredding it all. They used the shredder the entire day and filled up 3 very large garbage bags full of very fine paper dust. They used the shredder so much, I think they broke it. We have destructions tomorrow, so I'm hoping that they can get it fixed before then…they are the maintenance shop, so I'm hoping they can figure something out.

Today is Halloween and in the army stationed away from home, it's just another day. In my past I've always had a lot of fun at the workplace dressing up. Usually our entire department would pick a theme and all run with it. Since joining the army, all I've ever dressed up as is a soldier. This being my first time in family housing, I thought we would get a bunch of trick or treaters, but I found out that they do not visit the stairwell housing. They only head to the officer's housing...lol. I hear they block the streets and the kids make out like bandits. I guess I'll have to eat all the candy we bought for them…LOL.