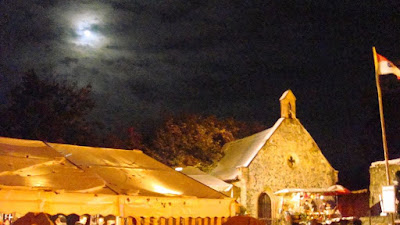 
Saturday: After the concert last night, I ended up sleeping in until 1030! Holy Cow!! Anyways the day didn't have a lot going on, just lounging around and watching TV until about 1600 when we decided to get ready for our Halloween trip to "Burg Frankenstein" (Frankenstein's Castle). We purchased tickets through MWR and left at 1730.

We had a few other people from the office go on the trip as well, so it was pretty fun. The castle is about 45 minutes away and they put on a big Halloween event each year. I had heard that it was pretty cool, so I wanted to make sure to go this year. The bus dropped us off at the entrance and as we made our way out of the bus we found there was snow all over the ground. It was going to be a cold night. We made our way up to the entrance of the castle and after getting searched for unauthorized items, we made our way in. The first stop was to get some food. The place had a number of spots to eat, we chose to get some bratwurst and fries…along with an adult hot cocoa.

After all the hype, I think we were a little disappointed with the entire event. I think part of the problem may have been how cold it was, being that everything is outside. We made a tour of the entire castle and the scenery was pretty cool. There were also some great costumes worn by the actors. One thing that was very surprising was how the "monsters" walking around would grab you, or smack your butt. I saw a few people even get picked up and carried off! I think everyone would have enjoyed everything a lot more, but we were all just too cold. We ended up getting some hot wine drinks to warm us up a bit. The first one tasted like hot liquid cherry pie and the second tasted like hot liquid apple pie. They were both amazing and did warm us up a bit. We then spent the night by a fire pit trying to stay warm. Like I said, I think it would have been more fun if it wasn't so cold. They had some shows on the stage with monsters dancing and stuff, but we were too cold to leave the fire. Even with the cold, I was glad we made the trip…I just wish the bus would have come back earlier than midnight. I think 2 to 3 hours would have been plenty of time to see everything and have a good time.

Sunday: Time fell back an hour last night, so we got a little extra sleep. We basically just spent the day chilling at the house. Besides a quick grocery run and some clean up while doing laundry, we just relaxed and watched TV. I was able to fit in a little schoolwork and then called it a day. Not a whole lot going on except trying to mentally prepare myself for another week of work.