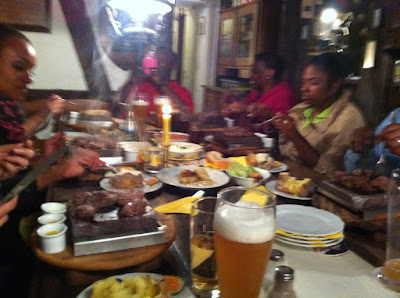 A somewhat blurry photo of our food at "the potato" restaurant

This morning's PT was a run with body armor. It's days like these that I'm extremely glad that I'm on profile. That would've messed me up pretty good! I headed to the gym and on the way over, the NCO in charge of the profiles walked with me and wanted to chat the entire way. He wanted to know about all my injuries, my profile and my long term plans for the army. I gave him all the particulars of what hurts and what I can and cannot do. I also let him know that I only ever planned on signing up for one term and then going back to normal life. I also said that I know I can do my job just fine and it's all the other crap that the profile limits me from. If the army wants to keep me that's fine, if they don't, that's fine too. I then headed and did some cardio on the stationary bicycle for my workout.

This morning at the office I was able to jump on a computer and update some files that were requested for my DTS. I'll do my part, but I still have doubts that I will ever see any of the money they are supposed to pay me for my travel expenses during the two classes I just took.

It's Thursday and you know what that means…one of my favorite days of the week in the army….Sergeant's Time Training! <Insert very heavy sarcasm here>. We sat around on one side of the office and went through various PowerPoint presentations on communication. This included sending up Medivac requests, spot reports, & SALUTE reports. Basically stuff we will never use the entire time we are here in a strategic unit. The class was of course given by two soldiers who were told at the last minute to prepare and give the class…the soldiers picked also had never given or even seen any of these reports in real life…such is our army training.

I headed to lunch in my car after training where I relaxed for an hour before heading over to the chaplain's office. I was told to report there at 1245, of course I have to arrive 10 minutes early…so make that 1235. This was totally unnecessary as I suspected, because he was still in the middle of eating his lunch. I had a seat on his couch and looked at the wall for a half hour before he was ready to start getting ready to leave. I grabbed the keys and the dispatch book for the TMP and filled out all the paperwork. I hooked up my GPS (I use this pretty much anytime I leave the city of Heidelberg because I'm directionally challenged). Unfortunately I couldn't find actual coordinates to our company headquarters on the web, only the hospital located in Landstuhl, so we used those and off we went.

The chaplain did not want to hear the radio, instead inserted an audio book on CD and we listened to how to basically think different. It was actually a pretty interesting book. The drive is a little over an hour and the GPS took us right to the hospital, but unfortunately a gate that only allows outgoing traffic. There was no easy way to get to another gate as we found out, we ended up driving through a couple small towns and farms before I decided to head back to the highway and try the next exit. This was actually the correct exit and we ended up making it to the company in time, just with a lot of scenic views beforehand…or as my friend calls it "building area knowledge".

I was waiting for the chaplain as he spoke with the company commander and the 1st sergeant zeroed in on me and made a beeline straight to me. I stood at parade rest as he addressed me and we ended up having a long conversation about my plans for the army. As I told the NCO this morning during profile PT, I only plan on staying in for one term. Our 1st sergeant had other plans for me…when he found out I was older and had a number of certifications under my belt already, he said "I'm in his crosshairs". He said he wants to move me to Landstuhl to do actual 25B work and make me an NCO. Before I would have jumped at the chance, but from what I've heard about working in Landstuhl…it's some strange hours. I've seen first hand how working different hours from your spouse can really affect the marriage. I also have no plans whatsoever to become an NCO. All the extra crap and responsibility…for a tiny raise is not worth it. I just want to do my job, do my part to contribute, and then go home. Thankfully I'm stationed in Heidelberg and will be out of the 1st sergeant's eyesight for the most part…maybe he'll forget about me.

The chaplain went around from group to group, also taking time to talk to a few people one on one. We didn't end up leaving Landstuhl until almost 1730. I was a little pissed because I wasn't told this in advance. My wife was stranded at work because of this. If I would have known in advance, I could have planned accordingly. I was able to contact my boss and have him give her a ride home…I didn't get home until 1900. Hopefully I will not have to be a chauffeur too often, but if I do…I can make plans in advance from now on.

We quickly got ready and then left for dinner. Tonight we headed to "Die Kartoffel" (The Potato) for SPC Mac's birthday. This restaurant is simply great food. You choose the size of your steak and they bring it out raw, cooking on a hot stone…along with a large baked potato. You then slice up your steak and let it cook to your taste on the hot stone. There are some dipping sauces to use, and you enjoy. Located inside a very old building, the experience is a lot of fun.