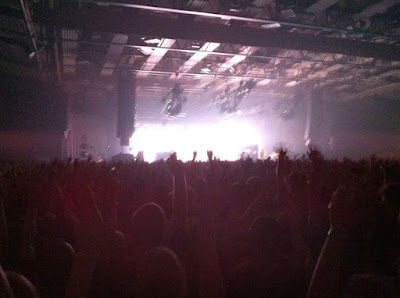 In the crowd at Die Ärzte concert...unfortunately the iPhone is not
the best camera to use at the concert.


This morning for PT we formed up at the middle school instead of the bowling alley parking lot. This was because the normal folks used the track to do 60/120s. This is 60 seconds of sprinting, then 120 seconds of walking. Those of us on profile got in our cars and drove to the gym. As I drove by my house I had to fight the urge to just go back home and get back in bed…LOL…just kidding. I ended up working out on the weight machines and had a great workout.
When I arrived at the office I found out it was going to be just the CAM, me and our new private (PV2 Ski). I spent the time surfing the web for a bit, then doing a SkillPort. Me and PV2 Ski then had to add some ComSec to one of the safes. Of course once a safe is opened we had to do a full inventory. After that I headed to lunch in my car as usual, then came back to the office.
PV2 Ski was told he could leave after lunch, his mother is here visiting. This left just me and the CAM for the afternoon. We had one customer come in for a scheduled appointment to pick up his keys. I did my part getting all the paperwork ready. Our CAM loaded the keys onto his device, then I had him sign in all the right places. Once that was done I cleaned up the office and we both left for the day at around 1400. Not a bad way to end a Friday.
Tonight I had plans, so I was happy to get off early. I went home, changed, then picked up my wife from work. We had dinner and then took off to the Europahalle in the city of Karlsruhe which is about 40 minutes away. I purchased tickets a while back to see the German punk band "Die Ärzte" and tonight is the night to see them live. This night has been over 20 years in the making. I first heard of die Ärzte (translated…"the doctors") way back when I came to Germany as an exchange student over 20 years ago. I've listened to their music ever since and try to keep up with all their new releases. I was surprised to find out that even after all this time, they are still touring and coming out with new music!
We drove to Europahalle after putting in the coordinates in our GPS and after arriving we quickly found out that all the parking at the event center was full. We were directed to head off in another direction. Luckily we came across a parking garage not too far away and quickly found a spot. Getting into the event was easy enough. I was really surprised at what I saw in the crowd. I was expecting everyone to be as old as myself or older considering how long the band has been around, but instead found a wide diversity of people there. The place was packed and filled with everything from pre-teens all the way to folks older than myself. Being a concert in Germany of course they sold a lot of beer. It seemed everywhere I looked someone was walking around with a big plastic mug of beer. The concert itself was great. Die Ärzte put on a great show. They played for 3 hours, and I enjoyed every minute of it. I heard a lot of the old songs I've listened to for years along with new ones I haven't heard of yet. They were full of energy and the crowd seemed to eat them up.
After the show we headed back to the parking garage through the rain. The line to pay for the ticket was a bit out of control, but after paying my 3 Euros we were good to go. We got home about midnight and then went to bed without setting the alarm…that is always a great feeling!