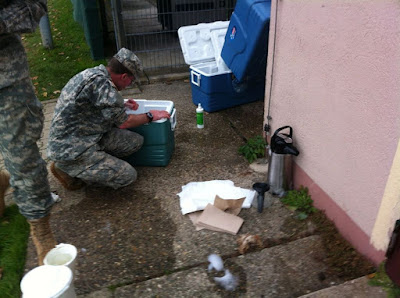 In the process of cleaning coolers, coffee pots and coffee dispensers
for our lazy ass S-3 office


This morning for PT those not on profile did circuit training, which is basically going from station to station doing a different exercise. I headed to the gym with the other profiles and rode my stationary bike for a cardio workout.

At the office today we had sergeant's time training of course…it's Thursday. SGT Mex gave a class on using SKLs (Simple Key Loaders, the devices we load our encryption keys on). Like most classes we have though, we are limited with resources. SGT Mex had one working SKL that he demonstrated with, but with the screen the size of an iPhone, it's kind of hard for everyone in the room to have an idea of what he's talking about. He did a good job with the resources he was given. We then learned about some legacy equipment that predated the SKL, which I'm surprised we even wasted the time on. There were a couple of NCOs that came into our office and both said the same thing when they saw this ancient equipment, they hadn't seen this stuff in years!

The next class was going over a message that was sent out by 5th Signal Command concerning 2013 training schedule and expectations. One of our NCOs went over the entire message with everyone in attendance. The NCO would pause after each paragraph or point in the message and let our platoon sergeant chime in and give his two cents on each subject. Most of it pertained to everyone excelling and doing their best. Some of it had to do with the downsizing of the army and this is where our platoon sergeant went into full swing about how horrible it is to be a civilian now. If we leave the security blanket of the army, nobody will hire us, veterans have it the worst in the U.S., we will regret it every minute and wish we could get back in. He then goes on to say how we have to not get into trouble and even exceed every standard to make sure we can stay in and not get kicked out. All this doom and gloom may work on the younger kids, but I've been around. It's all scare tactics to try and either motivate people to do better, or just to keep them from screwing up.

By the time the message was finished, it was time for lunch. I headed to my car as usual for music, my book, and a nap. After lunch it was full on destruction time, just like the start of every other month. I was shredding like crazy, printing out new inventory lists and inventorying our safes.

SPC Mac was told he had a "setup detail" and to report to S-3. He came back a bit later very pissed off and I can't blame him. Our lovely S-3 office, which has a full staff of enlisted soldiers in all ranks, told him to clean their coffee pots. This was the actual mission! Make sure he gets them really clean!! I would be freakin' embarrassed to ask for a person to perform a detail and then have them clean out my coffee pots that I use every day. In addition to the coffee pots they told him to clean out some coolers and some larger coffee dispensers. I could only laugh. Only in the freakin' army can you be pulled from your normal job to go to another office and clean their coffee pots because they're too damned lazy to do it themselves. Of course this is the same office that has the staff duty folks do their janitorial work for them. So SPC Mac brought all the crap back over to our office because we had a large water faucet outside, as well as larger sinks in the bathroom. I felt bad for him, so me and a couple other guys gave him a hand cleaning the stuff. I have to say that I had to restrain myself from taking a piss in the coffee pots.

This whole day was just another day why I have no desire to stay in the army any longer than I have to. All I can say is I'm now one day closer to getting out.