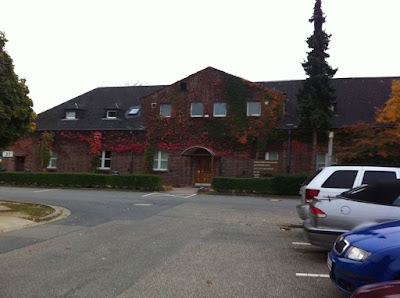 The JAG office on Campbell Barracks during this fall season

This morning for PT we all ended up heading to the gym. I worked out on the machines for my core and arms. It turned out to be a pretty good workout. It's starting to feel a little like the workouts I did in Korea, when I did everything on my own in the gym. It's nice to not deal with any of the nonsense and just hit the gym and get a workout.

At work it was just me and SPC JayZ there…at least for lower enlisted. I had a customer come in to pick up his encryption keys, so I did my part which is just updating his paperwork and making sure he signs it in all the right places. Our CAM downloaded his key onto his device. After the customer left the door buzzer went off and I opened the door and let in an officer. I asked who he was here to see…he said our CAM, so I headed off to get her. What I didn't realize was that he was our new company commander…and when the commander comes into the office, you're supposed to call the shop to attention. Big mistake on my part. The commander didn't say anything, but I got a couple stern WTFs from our NCOs after the event. I knew that name looked familiar when he came in. The problem is that this is the first time I've even seen the guy. This wasn't a thing we did in Korea my whole time there, and because the company headquarters is in Landstuhl…we just don't see the company commander here in Heidelberg too often. My bad…It's just another one of those things that remind me why I want to get out of the army. All the stupid other crap besides your job that you have to deal with. I just want to go and do my job. I do feel like an idiot for not calling the shop to attention, but there's not much I can do now. I guess it won't happen again…unless we get a new commander…LOL.

I decided to hang out with SPC Mac for a bit on the other side of the office. He's all about spending most of everyday sending out resumes and preparing to get out of the army. Especially because of stupid stuff like what he has to deal with tomorrow. He has staff duty tonight, then is required to go to something called SRP tomorrow afterwards. I'm not sure what exactly SRP is, but I hear it takes a while, I will find out tomorrow when I go. The problem is that he will have been working already for 24 hours, then have to attend the SRP.

I headed to lunch in my car, read my book, listened to music and took a nap…the usual. I then headed back to the office and did the paperwork for another customer that came in to pick up his key. Not my customer, but because everyone else is in class, we all help out with each other. The rest of the day I spent the time knocking off a SkillPort, then surfed the web. I did help modify a couple documents for our CAM, but nothing major.