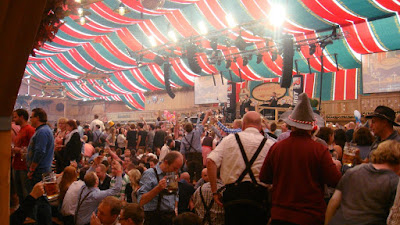 Inside one of the "tents" at the Stuttgart BeerFest. One big
party where everyone has a great time.

Saturday: We woke up and got ready for the day, then headed to the park and ride off post to catch our bus for the "Cannstatter Volksfest". This fest is also known as the "Stuttgart BeerFest" and I keep hearing that it's better than Oktoberfest, so I had to check it out. The local MWR facility scheduled a trip, so we signed up and headed out. One of the great things about attending this event via a bus trip is that we don't have to worry about driving, parking, or drinking and trying to drive home. Just get on the bus, sit back and relax until we arrive.

The bus ride was a bit over an hour. We headed into the fest and it turned out to be similar in size to the Oktoberfest in Munich. It was huge, with several beer halls, rides, games, and vendors. We went through one of the beer halls first just to check it out. We then decided to go on some rides before we drank anything. Thankfully it didn't rain on us like Oktoberfest. We went on several rides and then headed back to the beer halls, but by this time they were packed. It's crazy how difficult it can be to actually get a beer at a beer festival. We decided to head to one of the beer gardens outside. We had some chicken and beer, then did some more walking around.

It's true that the festival was not as packed as Oktoberfest, but there were still plenty of people everywhere! From what I could tell, you would have to arrive early and get in a tent (beer hall) and stay if you wanted to drink in there. There is live bands, everyone seems to be standing on the tables drinking. It looked like a fun time, but we did indeed have fun just checking everything out. Our bus left at 2100, which turned out to be about the perfect time. Everyone had plenty of time to experience the festivities, and nobody got too drunk to make it back. There was some sort of incident with the German police and some of our passengers, but the bus driver was able to get them all back to the bus before we left…not sure what went on there.

Sunday: Not much to write about here…we slept in, cleaned house, did laundry and watched some TV shows. Not too exciting, but it was a nice relaxing day before I head back to work tomorrow. I would start counting down the days until next weekend, but I have staff duty again next Saturday, so I will have no weekend….Grrrrr.

Check out pictures of the BeerFest in the slideshow below or my flickr album: