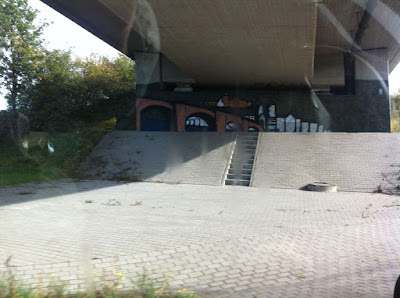 Some German graffiti under the overpass on the way
to work depicting the city of Heidelberg. Unfortunately my window
was dirty and there is a reflection.


This morning for PT the normal people went on a run with their body armor, while those of us on profile headed to the gym to workout. I rode the stationary bike for some cardio. This morning in the office we had sergeant's time training as usual for a Thursday. I applaud the effort of someone to actually have some MOS based training. The training session was on IP addressing and subnetting. The problem was that the trainers were not so good. While reading the slides they kept saying or inserting wrong words. The guy doing the training also tried to act like he knows a lot, but kept getting stuff wrong. So in actuality the training was pretty much useless, but I guess still better than some of the other crappy training we have on stuff that has nothing to do with our job or MOS. It's just typical Thursday training for the sake of training. It doesn't matter if it's actually useful or not, they just have to mark down that yes, we did indeed do some training.

We broke for lunch and I headed home after picking up my wife. We had a quick lunch and then she stayed on post to help out with a job fair that was going on. I headed back to work and surfed the web a bit before helping out our CAM with scheduling some appointments for a couple customers. We have to make sure our customers come in at staggered times to get their keys issued to them, or else we would have everyone try and come in at the same time which would not be good. Besides that I inventoried a safe and did the paperwork to mark up the rest of the safes as closed. My CAM keeps telling me I should go warrant officer. I tell her I did actually think about it at one point when I first joined, but now I can't imagine staying in one second longer than I have to. We then were released at 1600…sweet!

I headed home and hung out with my wife for the rest of the evening. I now have less than a week before my next class starts, after that I should keep pretty busy both at work and at home.