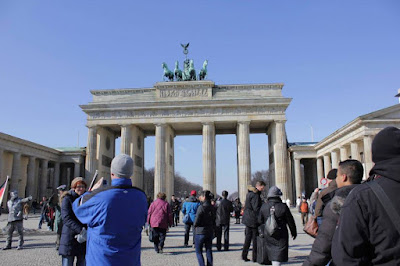 This weekend was pretty awesome. We left early Friday morning and headed off to the city of Leipzig. Here we met with a guy that my wife and I both worked with over 10 years ago at the newspaper. He worked with me in the I.T. department. Now he sets up robots in hospitals around the world and happened to be here in Germany, so we made the 4 hour drive to visit him for a while. He showed us around the city and then we had lunch together at a great Italian restaurant where they make the food right there in front of you.

After visiting with our friend in Leipzig we headed off for a 2 hour drive to Berlin. I had booked a hotel for 2 nights right in the middle of Berlin. The stay was awesome and the city was great. We were going to try and either walk or drive to all the sites, but decided to get a city circle bus tour pass. This pass let us ride special buses that just made loops around the city stopping at all the interesting sites. We could hop on and off at our leisure and check out whatever we wanted. During the bus ride we would hear interesting facts about the city and the places we were about to see. It was pretty cool to see everything and I would recommend any tourist to check out this bus tour. We took a ton of pictures and got to see some amazing stuff. I made the mistake of climbing to the top of Victory Tower…my legs are still sore!

We also met and had dinner with one of the exchange students that lived with me and my family back in high school. I also had the opportunity to stay with her and her family for a summer after high school. She happened to be living in Berlin and I had just recently made contact with her again thanks to Facebook. Now I've been able to reconnect and meet with all three of the exchange students that have stayed with me back in high school. Pretty crazy after all these years!

Unfortunately SGT Mex had his going away dinner on Friday. He left and then flew out on Saturday, so we didn't get to see him off. We had already booked the hotel before they made these plans. I also didn't tell them where we even went. Berlin and Leipzig is well outside of the 150 mile radius we're allowed to travel without putting in a pass. Putting in a pass is such a pain in the ass, that I didn't even bother. One of the nice things about being in the chaplain's office is that I haven't done a weekend checklist or had a POV inspection either. I did put in a pass for a trip I have planned in April, but that is actually leaving the country.

I had to cut my 4-day weekend short because I had staff duty on Monday. I'm not too pissed about it because we had so much fun on the 3 days prior…but it's still such a waste of time. Sit in an office and surf the web just trying to pass the time. One good thing about staff duty when I have schoolwork…it gives me plenty of time to deal with all of it. With more people leaving staff duty is becoming quite the burden. SGT Steroids has it with me tonight, then has a recovery day tomorrow and then staff duty again on Wednesday…it's out of control.

Check out a few of the photos below (Edit: flickr deleted my previous slideshows unfortunately and there were a ton! So I just had to remove the links that were here)