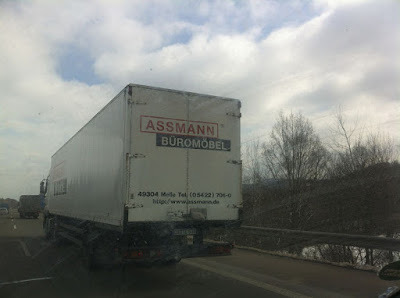 Just a photo I snapped while driving along the autobahn.
OK I may have the humor of a 12 year old...LOL

This morning there was no PT because of some sergeant's time training in Landstuhl. I was exempt because I had to drive the chaplain. I spent the first half hour at work putting together everything to submit a pass request. We are planning a trip on the April 4-day. Anytime you go on pass or leave, there is a ton of paperwork that must be submitted.

Once the pass was submitted to my boss, I headed out with the TMP and filled it up with gas. I was back and ready in plenty of time for our scheduled departure at 1030. I drove the chaplain to Landstuhl, so he could meet up with the soldiers located up there. On the drive up, the chaplain fell asleep and he doesn't like the radio on…so it was a quite ride. I dropped him off and then headed to the hospital to grab some lunch at their food court. I was planning on having some Subway, but the line was out the freakin' door! I guess showing up at noon is not a good idea. I chose pizza instead, there was only one person in line…LOL.

After eating, I headed back and waited in the van while parked in the parking lot. I was drained, so I took a nap. I then read a "Stars and Stripes" newspaper I bought at the hospital. I noticed the headline about North Korea threatening a preemptive strategic nuclear strike and had to read it.

The chaplain came out and we left around 1500, again he slept on the way home and no radio. It's pretty strange to think that this is a days work for me. Driving a guy back and forth and a lot of waiting in a van. When I got back it was after 1600, so I spent a while just surfing the web passing the time until 1700 rolled around.