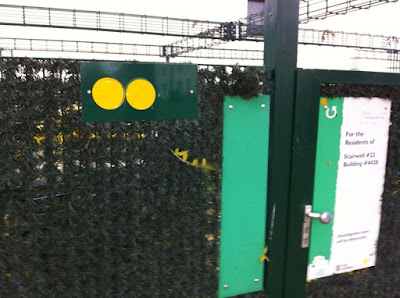 Our recycle and garbage area for our stairwell has received two warnings.
I guess the new family in our stairwell doesn't know how to recycle properly.
If we get another one, I think there may be consequences...I just don't know
what those are yet. They take their recycling seriously here in Germany.

This morning for PT everyone ended up heading to the gym. One thing I really like about being on profile is that even when everyone heads to the gym, those of us on profile head straight there after accountability. Everyone else has to stand in formation, wait a bit, then finally do organized stretching and warm up drills. By the time everyone else arrived to the gym, I had already been working out for a while. As far as workouts go, I did my normal weight machine routine working on my core, arms and back.

At work today we had a few people out for their building's fall cleanup. We didn't do much in the office for the first part of the day, I checked my email and surfed the web. I heard a rumor that we were going to have a pee test after lunch, which I was happy to catch wind of before it happened. I usually end up going pee right after lunch, that would have left me sitting there with an empty bladder drinking water waiting to go again.

I took lunch in my car as usual with my book, my music, and a nap. When I got back in the office people started showing up. People said they were called and told there was a mandatory meeting they had to attend. When everyone arrived we were told we were having a pee test and everyone here was selected on a "random" basis to get tested. I put random in quotes because our tests are never random, they always to 100%. So people that had the day off, or had to work the night shift, all had to come in for this special event.

I was one of the first to go, and was able to finish the process of peeing in a cup while an NCO watched. It used to seem a little strange, but I've kind of become used to it by now. The entire process starts with me taking an empty cup to the bathroom while holding it above my head. I then go pee in it, making sure to fill it about 3/4 of the way. I then put the lid back on and carry it back out to the official table…all the while holding it above my head. I guess this eliminates the possibility of anything contaminating the sample. I was told that my sample "looks like watered down apple juice". I wasn't sure how to take that…..thanks I guess?

Anyway I then chatted with folks while everyone else made their way through the line. The last guy ended up taking a couple hours before he could manage to produce his sample. A lot of drinking water and pacing around. The rules stated that you could not leave for the day until you produced a sample.

That was the highlight of the day…watching someone watch me take a pee. The only other things I did all day was surf the web and talk to my boss about the new iPad mini. I also heard that indeed SGT Mex is going to get kicked out of the army, we just don't know how long the process is going to take. No word on when or where I'll be moving to, but I did hear that there will be a meeting concerning everyone's future on the 16th. Maybe we'll hear something after that.