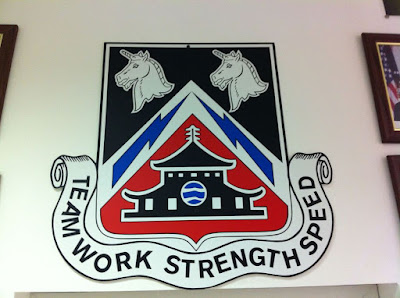 The 43rd Signal Battalion Insignia in our office, I'll be so happy when
it stands down and is no longer, which will happen as they shut down Heidelberg.


This morning we did not have PT, instead we formed up at 0730 for accountability and then pretty much the entire office left for the range. I headed back home and then went into the office at the normal time with one other person. It was strange only having two people in the entire office. Both of us are on profile and cannot wear the body armor and helmet that is required when firing at the range which is why we stayed back. I did my schoolwork and my coworker watched youtube videos the entire morning.

At lunch time I picked up my wife and headed home. She had to do some work on PHV, so we had lunch together. I then headed back to the office and was the only person there for a couple hours. My coworker had to drive the chaplain to Landstuhl today. It was between him and myself, and because I've done it before, he got the honors this time. My boss came back at around 1500 and gave me some not so wonderful news. Because of some staffing issues, I have to do staff duty tonight. Because of this I was able to leave and head home to pick up some supplies and my laptop. I was a little pissed, it really sucks only getting an hour and a half notice that you have to work until 0900 the next morning!

I headed home and grabbed all the necessities and then headed back into the office. I have staff duty with SGT Mex, so it shouldn't be too bad. We also have another sergeant in our office (who I'll call SGT Steroids) who got an article 15 and received extra duty. The regulations state the an NCO's extra duty is only supervisory duty, but the CSM (Command Sergeant Major) here said that is BS, and all NCOs will have to do normal extra duty just like any other soldier if they get into trouble. I couldn't believe my ears, something that actually made sense! So SGT Steroids is at staff duty as well and was given a laundry list of items that he has to do all weekend long. Everything from dusting the office to raking leaves outside. I think all he did the entire night tonight though was dust a desk or two while chatting with SGT Mex.

I spent the night just reading on my iPad, or surfing the web. Surprisingly I didn't watch any movies or even listen to music. There was too much conversation going on, which I guess can be a good thing because the night passed by pretty quick. SGT Mex had a lot to say now that he is officially getting out of the army. It's interesting hearing his perspective on things. All I can say is that I wish it were me getting out as well.

Tomorrow starts a 4-day weekend for veteran's day. I'll be sleeping for the start of it, but I'm looking forward to the rest of it even though we do not have any major plans yet.