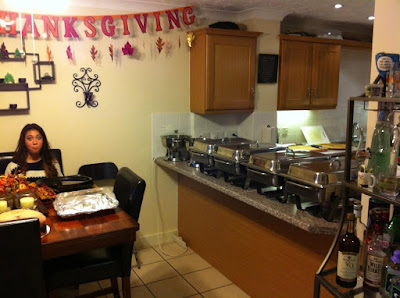 I knew it was going to be an awesome thanksgiving when we were the
first family to arrive and there was already this much food out!


Thursday: (Thanksgiving Day) We slept in, then our portion of the food was prepared. We headed over to another house to celebrate Thanksgiving with 70 people! My wife is an island girl, as is her cousin of course. I noticed very quickly when I joined the army how fast island people find each other and hang out. It doesn't seem to matter which pacific island they are from, they have a special bond and when away from home all the island people seem to get together and form a surrogate family. I was of course the only white guy there, an island person by marriage :)

The meal was huge, not only enough to feed all 70 people, but feed them about 4 times over! It also had an island flair to it with lumpia, rice, and many other dishes besides traditional turkey and stuffing. It was awesome. I headed to the garage at one point and hung out with the guys, had a few beers, listened to some island music, and just chillaxed for a while. We stayed until about 0100. 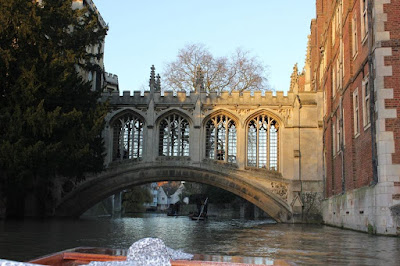 In our boat heading down the river on our "punting tour"
You can see some of the other boats ahead of us.


Friday: We all slept in, which was nice after staying up late last night. I woke up and did some actual 25B work! I worked on a computer at my wife's cousin's house…LOL. We then headed out for "high tea" in a local town. The tea was brought out just like you see in little kids tea sets (although it was real and not plastic of course). Their selection of tea was pretty impressive. My wife ordered some mango/cinnamon tea (or something close to that), I ordered traditional tea, and our two hosts ordered chili tea and popcorn tea…some pretty crazy stuff going on here! We also ordered a sandwich for lunch, the tea and the food was great.

We headed to Cambridge and checked out the city before going on a "punting tour". This is similar to a gondola tour where a guy in the back pushes you along in a boat with a long pole. He was also our tour guide giving us historical information all along the river and the university. It was pretty cool, I have to recommend checking it out if you ever spend any time in Cambridge.

We headed to McDonald's for dinner and had "take away" (to go). I had onion rings and a "Spanish Grande"…and learned the reason we don't have onion rings served at McDonald's in the US…they suck!. We then met up with some friends and watched "Expendables 2", an awesome guy movie! After that we finished up the night going to an English pub to have a pint. I had to have at least one before I left England. 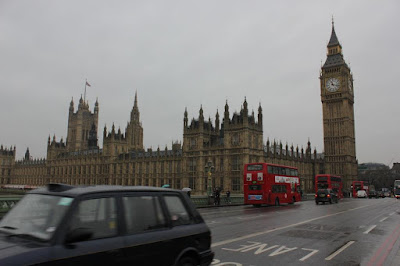 Big Ben during our soggy trip to London


Saturday: Woke up early at 0600 so we could head to London. We took "The Tube" (the subway) and had to "mind the gap". This was said at each stop to remind people to watch out for the space between the train and the platform. It was kind of funny, because it was being said constantly. It was a soggy day, but we checked out all the tourist attraction sites anyway. Big Ben and Parliament, The London Eye, and Buckingham Palace. We then headed to Westfield Shopping Center. This is a huge mall and was packed full of people. So many people that I could barely get from store to store. I quickly gave up and just sat down and told the girls to meet me when they're done…it was out of control!

Sunday: Slept in and basically just had a lazy day. We hung out in the house, watched a movie and just visited all day. I did a little more computer work on their computers and also did some schoolwork…I'm a little behind because of the holiday and our trip. We left to the airport and headed back home…arriving about 2300.