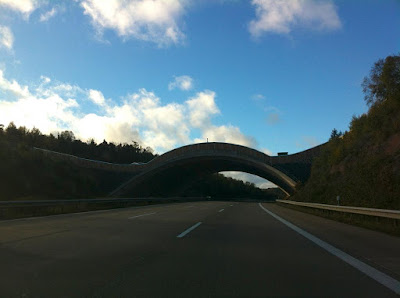 Driving on the autobahn towards the Landstuhl hospital...a wildlife crossing


This morning's PT had those of us on profile head straight to the gym after formation as usual, then unlike most days, 2nd platoon fell out and all headed to the gym as well. Usually the company all does the same thing, but I guess 2nd platoon wasn't feeling it today. I'm not even sure what 1st platoon did today, as for me I did cardio on the elliptical machine. Unfortunately all the stationary bikes were taken, but the elliptical machine is also a good cardio machine…I just don't care for it as much, it just doesn't feel natural. The important thing is that it is also a no impact machine, so no extra pain for my knee and neck.

Instead of heading to work I headed straight to the Landstuhl hospital again this morning. I had an 1100 appointment. I needed to arrive early (as usual) and the trip takes a little over an hour. So just in case there was traffic I left right after I dropped my wife off for work at 0830. This did give me a small window to take a nap once I did arrive at the hospital, which was perfect because I was about to fall asleep on the drive there.

I headed into the neurology clinic and after filling out some paperwork and only waiting a few minutes, I was called back. The doctor had me take off my jacket and shoes, then asked me a bunch of questions. She then inspected me all over, making sure I had good communication from my brain to all my extremities. She pulled up the MRI and showed me the results. It looks like I have some degenerative disks that are stressing my nerves and causing my headaches. It was easy to see in some of the photos how a couple of my vertebrae did not have much space surrounding them as the others. She then suggested that I get a shot in the back of my head to numb the nerves up there. It's a little scary when people start talking about sticking needles in your head. She had a concoction of 3 different ingredients, I honestly can't remember them though. She then drew them each into a large syringe with a needle that made my eyes bug out of my head. She saw my reaction and told me not to worry, she was just using that to draw out the medicine. She then replaced the very large needle with a much smaller one…the one that she stuck in the back of my head…twice! One injection on each side near where my spine connects to my head. It was a little discomforting, but not to bad. The effects should last a month, so I'm trying to be very cautiously optimistic. I can't imagine not having constant headaches every day now, if this can fix them…I'm going to be a very happy dude!

I made an appointment with her in 4 weeks to go over everything and proceed with another shot if needed. I'm also going to make a headache log each night and not take any over the counter meds. I'm really crossing my fingers and hoping we may be on to a solution at least to fix the symptoms of my issues.

I ate lunch in my car at the hospital before leaving and ended up getting back to the office at 1400. I did a little bit of work trying to contact my customers and getting some dates on when and where they will go when the Heidelberg post closes. We need to start the process of transferring their accounts to the various other ComSec accounts that they will be moving to. That will be a process, so we're trying to be a little proactive.

I spent the rest of the day as usual…surfing the internet and then cleaning up when it was time to leave. We were released at 1630.