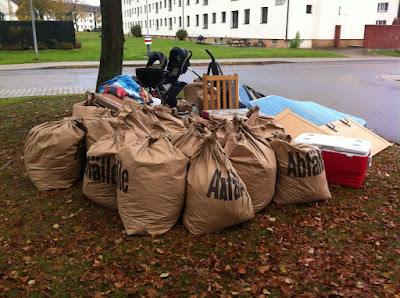 The results of our fall cleanup for our building. Lots of junk and a bunch
of bags full of leaves.  This pickup spot is located on our neighboring
building's curb...they haven't cleaned up their leaves yet.


This morning for PT I headed to the gym as usual with the profiles. I'm not sure what the normal folks did since we left before they got started, but today is normally a cardio day. Speaking of cardio...I had a pretty good cardio workout on the stationary bike.

Work call this morning was actually in front of my building at 0900 instead of the office. This week is fall cleanup, with each building coordinating with their tenants to work one of the days. My building happened to be today. It's not actually a bad thing, I don't have to leave the house early and I get to wear civilian clothes. I met up with our supreme building commander (not sure what his actual title is, but he is the highest ranking in our building…so he is the guy in charge). All of PHV is slowly starting to shrink in terms of population and our building is no exception to this. At one end of the building there is only one family living in the stairwell, which can hold six families. In my stairwell there are four families and at the other end I believe there 5, for a total of 10 families in a building that can hold 18. Out of the 10 families, only 3 people showed up for the cleanup at first. About half way through a couple more showed up to help.

We started by just taking a walk through the attic areas and the basement areas of our building. The common areas are places which seem to attract junk that people just leave after they PCS. Our supreme building commander asked if any of the stuff laying around was ours, but nobody claimed it. He wants to make sure the stuff is not somebody's that is living here before he tosses it. We did haul out a few items we could tell were just junk (i.e. a broken mirror). Everything was placed next to the curb for pickup by someone else.

We were then given a rake or a large broom to start cleaning up around our building. I took a rake, put in my headphones and started making big piles of leaves while rocking out, not a bad way to spend the day…in fact much better than sitting in the office, sitting in a chair, looking at a wall. Once we finally completed all the sweeping and raking, we were given a bunch of large bags to put all the debris in. Once all the bags were full and taken to the curb with all the other junk, we were finished.

I headed to my house and ate lunch. I then took a nap on my couch, much better than my car LOL. I then did schoolwork for a while, taking advantage of the extra time I have and waited for my wife to get home from work. One other item of note, I was introduced to a band called Rock Sugar, a very unique band that does a mash up of songs that I grew up on. It's very strange to hear the lyrics of Journey's "Don't Stop Believin'" sang to Metallica's "Enter Sandman". You can check out their facebook page here. Not a bad day, we got a lot of stuff done and I only had to work half of a day.

Here's the video for Rock Sugar's "Don't Stop The Sandman"